Bili’n Tractor still confiscated in an example of Israeli “Justice”

by the ISM Media Crew

“Free” Access to the Palestinian enclave at Metityahu East settlement

The Israeli Civil administration (the administrative arm of the military rule in the West Bank) is demanding 5428 shekels ($1357) to cover the expenses of towing the tractor they confiscated from Bil’in farmers, Tuesday the 29th, to the military base in the settlement of Beit El. The tractor was confiscated when it uncovered illegal infrastructure buried in the Palestinian enclave inside the Metityahu Mizrah settlement. In addition, the Israeli authorities are demanding that the tractor driver and Mohammad Khatib from the Bili’n committee against the wall and settlements, who rented the tractor, be investigated by the police and that each of them submit a signed statement that they will not use the tractor again to do work on the Palestinian land in the enclave. Until these conditions are filled, the Israeli Civil administration will continue holding the confiscated tractor in the military base. 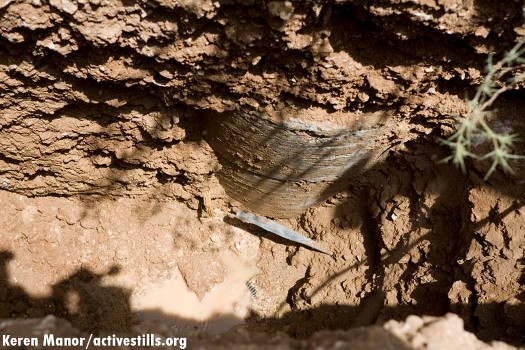 On Tuesday 29th May 2007, residents of Bil’in, accompanied by Israeli peace activists, came to assert their right to work the land in one of the enclaves. Israeli peace activists filmed as Bil’in residents began to plough the land, using a tractor brought from Israel, as Bil’in’s tractor is not being allowed to cross the gate in the barrier, despite access for agricultural work being promised by the Supreme Court. They soon exposed a sewage pit that had been buried under dirt and debris. The plough hit a pipe leading to the pit, causing a leak. The head of security in Modiin Elite arrived on the scene, informing those present that they must immediately stop working on the enclave, saying that such work was ‘life threatening’ due to underground electricity cables which could electrocute farmers using standard agricultural tools. After this warning the workers immediately stopped work, but soon military forces arrived and declared the area a Closed Military Zone, confiscating the tractor for being used for doing development work without a permit. 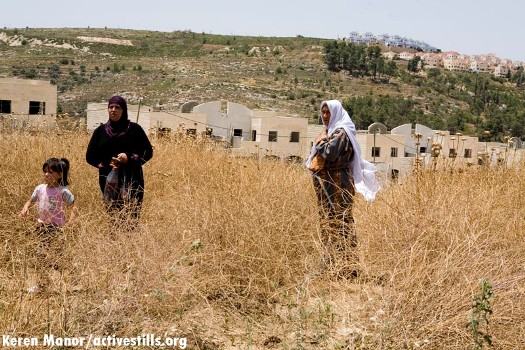 From 2000 to 2006 hundreds of housing units were built in Matityahu East without permits within full knowledge and without any hindrance, from the Israeli Authorities. However, when the Palestinian owners of the land bring a tractor for agricultural purposes, within minutes, the civil administration, private security guards, police and military all work together to “enforce the law” claiming that the Palestinians are doing development work without a permit.

The High Planning Commission, a branch of the Civil Administration, submitted a new master plan for the settlement that was meant to retrospectively legitimize ‘large scale illegal building’ of Matityahu east committed by real estate companies Green Park and Kheftzeba. In this plan, regarding the land that was acknowledged as privately owned Palestinian land, it was determined that, “in every place where there was building or change in purpose in the enclave, all the structures and building debris will be removed from the area, and it will be covered in 40cm of earth … undisturbed access will be allowed to the enclave… this is a condition to be give validity to this plan”. On January 2007, despite objections raised by Bil’in villagers who pointed out, among other things, that the enclaves had not been restored nor was free access granted to them, the new master plan for the settlement of Maityahu East was approved by the high commission of planning and building in Beit El.

In 1991 Israel annexed 1,100 dunums (275 acres) of the land of Bil’in. The confiscation was justified by reference to an old Ottoman-era law allowing for confiscation of ‘unused’ land for State purposes. In the same year the villagers appealed to the Supreme Court. The Court approved the majority of the land confiscation, but acknowledged that the plots densely planted with olive trees were clearly being used. These plots were not confiscated because their use by villagers from Bil’in demonstrated their ownership . However, even though the court had explicitly recognized that these plots belong to the villagers of Bil’in, somehow these plots have subsequently become the enclaves in question. 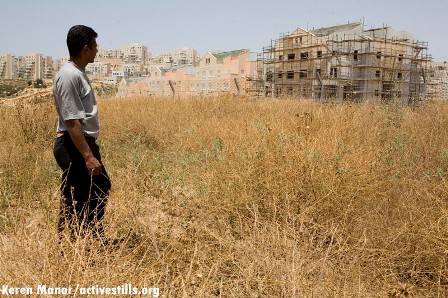 Eyad Burnat, head of the Bil’in popular committee against the wall, looking at the houses the real estate companies built without permits in Matityahu East from within the “Palestinian Enclave”

The land was handed over to two private real estate companies, “Heftziba” and “Green Park,” after it was confiscated by the Israeli authorities. This follows a typical pattern of settlement expansion, whereby Palestinian land is first declared Israeli state property and then eventually distributed to Israelis for private use. In 2000, the Metityahu Mizrach settlement was built without permits not only on the land that was confiscated, but also on the land that the Israeli Supreme Court recognized as privately owned Palestinian land. The route of the wall in Bil’in is designed not only to protect the settlers of Matityahu Mizrah but was designed according to the master plan of the settlement to allow for its future expansion. See B’tselem Report

The Israeli Supreme Court will hear the appeal (1526/07) this Sunday, submitted by Bil’in residents and Peace Now, against the decision of the High Commission of Planning in the civil administration to retrospectively legitimize ‘large scale illegal building’ in the settlement Matityahu East. Almost the entire settlement of Matityahu East – in which the building of 2722 residential units is planned – occupies land belonging to the village of Bil’in, west of the current route of the separation fence. The new settlement is the main reason for the route of the barrier in Bil’in. The state is requesting that the Supreme Court remove the freeze on building and allow more settlers to move in, since the plan for the settlement was approved by the high commission for planning and building in Beit El.

In addition to the 5428 shekels that is need to be paid in order to release the confiscated tractor, each day that the Israeli authorities hold the tractor, the owner is losing his main means of income. To help the Bil’in committee against the wall and settlements release the tractor and compensate the driver please consider sending a donation to the ISM noting that the money is for this purpose.