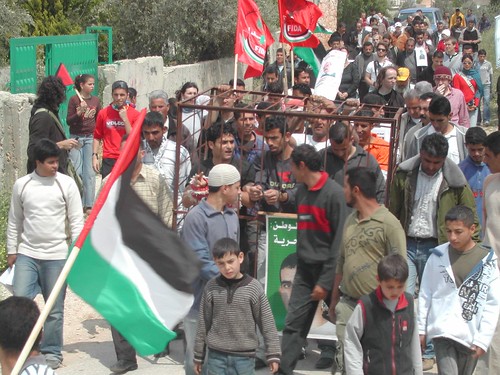 At least 15 demonstrators were injured today in the village of Bil’in. Israeli soldiers fired tear gas and rubber-coated steel bullets at a crowd of Palestinian, Israeli, and internationals, who were non-violently resisting Israel’s Apartheid Wall and Occupation of Palestinian land.

Every Friday for the past 26 months, Palestinians and their Israeli and international colleagues have been meeting in Bil’in and demonstrating against the Apartheid Wall. Today, in commemoration of Palestinian Prisoner’s Week, a portable “jail cell” was carried along the march towards the Wall. Palestinians, with their hands tied, resembling prisoners, marched inside the cell. Photos of Marwan Barghouti and other political prisoners were seen throughout the march.

Israeli forces were waiting inside of the Wall, however, preventing the demonstrators from reaching their destination. A high-powered water tank was also inside the Wall, waiting to be used on the demonstrators. Instead, the army started propelling tear gas at the peaceful demonstration. As people began to scatter in various directions, soldiers fired indiscriminately into the trees. 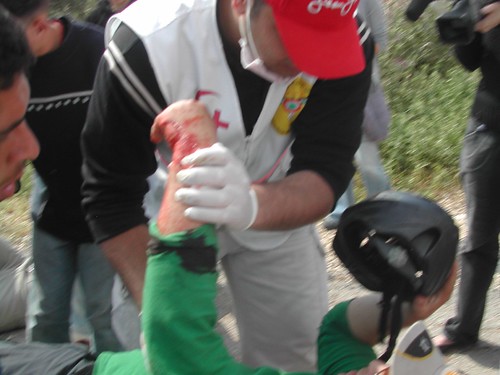 When the demonstrators regrouped and began their march to the Wall again, the army began using an excessive amount of tear gas and rubber-coated steel bullets. Martin, an American solidarity activist, explained, “Just as people cleared the smoke from the tear gas they had to start dodging rubber bullets. Even the demonstrators who were retreating back to the village were at risk. I even saw a medic from the Red Crescent being carried away.” 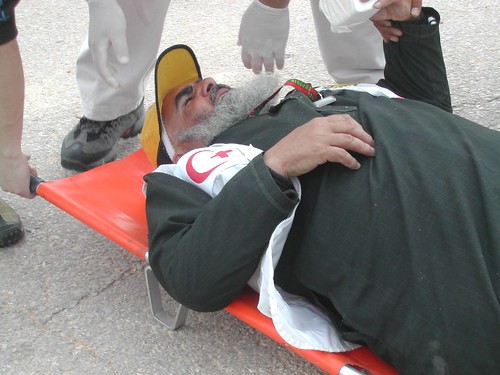 “Every time I turned around I saw another person being carried away. I have never seen the army this aggressive in Bil’in,” said Miriam, a Palestinian activist. 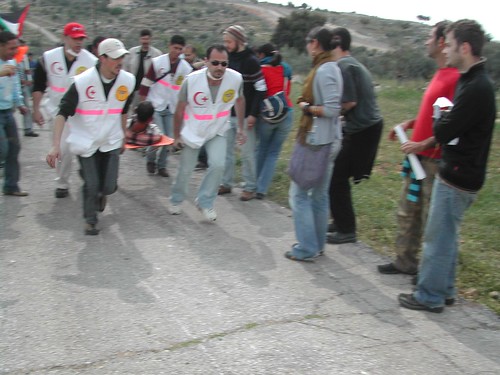 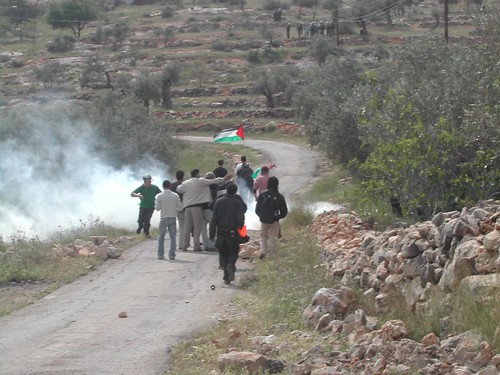 Another Palestinian activist explained, “Just like our Palestinian brothers and sisters in Israeli jails, we too are in a jail here in Bil’in. But our prison here has no ceiling.” 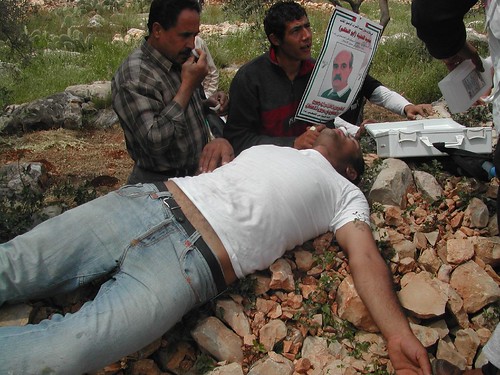 According to Stop the Wall, of the 11,000 Palestinian political prisoners being held captive by Israel, 450 are children and teenagers, 125 are women. Held in “administrative detention” are 1,050 Palestinians, which means they have not been charged with any crime and can be jailed for up to 6 months with the detention renewable indefinitely. 186 Palestinians have died in the 27 Israeli-run prisons.