by the ISM media team

UPDATE, Saturday 13th : Emilio, the Spanish AP journalist injured by a concussion grende in Bil’in yesterday, is still in hospital in Ramallah where his injuries have been identified as more serious than at first assumed in that he has a broken leg. In a further development, Ashraf from Bil’in, who has lived at the outpost for the past year, was detained today for three hours at the Wall on his way to the outpost as a punishment, according to the soldiers, for participating in yesterday’s demo. Access to their land on the other side of the Wall is becoming increasingly difficult for Bil’in villagers and their supporters.

Today in Bil’in one hundred internationals and local villagers gathered to protest the apartheid wall running through the village. The theme of today’s demo was solidarity with Maan News Agency photographer Fadi Arouri who was shot in the stomach with live ammo during a recent IOF invasion into Ramallah. 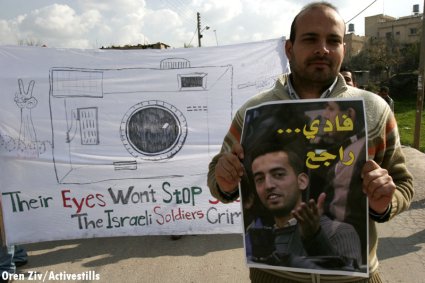 As soon as the march reached the gate in the Wall the IOF fired tear gas at the peaceful demonstrators. After about ten minutes of chanting slogans opposing military violence, some of the local children started throwing stones but were quickly stopped by village adults. This was met quickly with tear gas and concussion grenades by the IOF. Some activists tried to dismantle the razor wire.

As the IOF began to open the gate in the wall and move forward, many internationals and locals attempted to block the entrance of IOF jeeps. They were beaten with clubs, shoved, tripped and generally roughed up by the IOF. 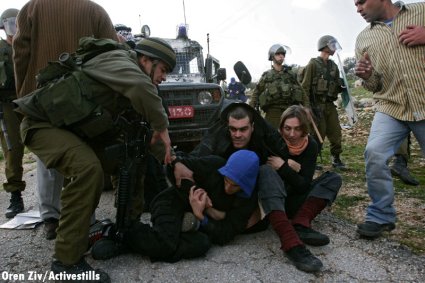 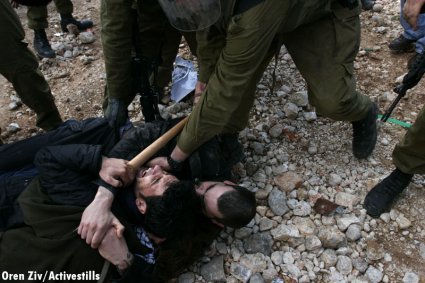 At least five people were injured including one old man, who needed treatment from a medic, and an AP journalist who was injured in the leg with shrapnel from a concussion grenade. Villager Wael Nasser was hospitalised after being beaten in the head with a baton. The jeeps invaded the village firing rubber bullets and tear gas at children and returning groups of protesters.