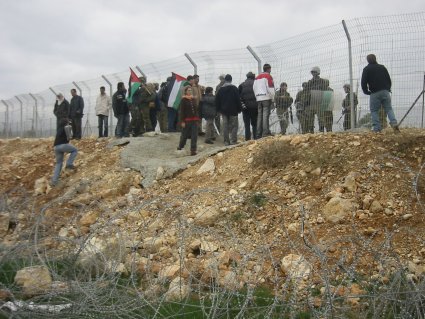 The IOF shot rubber-coated steel bullets at Bil’in Popular Committee Member Abdullah Abu Rahme, wounding him twice in different parts of the leg. The soldier took aim and fired the bullets from less than 50 metres away at Abu Rahme’s leg after today’s peaceful demo against the Apartheid Wall in Bil’in.

A larger than usual number of villagers participated in today’s protest on the eve of the Eid Al Adha feast. After marching to the gate in the wall, marchers passed between the gate and razor wire, which forms the first barrier in the wall. Soldiers clambered over the gate, a task made more difficult by the razor wire across the gate put there by the IOF, and tried to close off the opening.

By this time the many protesters who had passed through, started walking along the ridge between the razor wire and the next obstacle in the wall formed by a three-meter high fence. Some looked for ways of scaling the illegal structure. 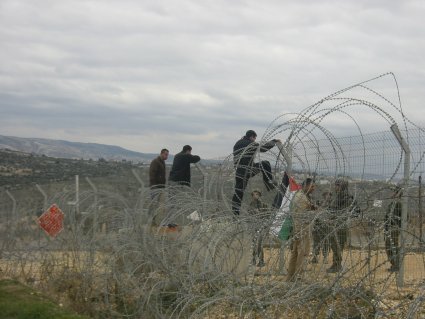 Those left on the other side of the razor wire managed to find openings in it, and some reached the group protesting on the ridge despite the multiple rounds of sound bombs fired by the IOF.

As the protesters reached the outskirts of the village they noticed soldiers in two empty houses and urged them to leave. The soldiers vacated one house but remained in the other despite requests from the villagers to leave.

When the villagers entered the house the soldiers started lashing out at them with their batons causing cuts and bruises to arms and legs. Popular Committeee member Mohammed Katib and Farhad Burnat were among those beaten by the soldiers. Snipers occupying a nearby roof fired teargas at those in the vicinity of the house. Instead of leaving, the IOF invaded with several jeeps and soldiers started firing rubber bullets at protesters. Abu Rahme was shot as he was sitting on the ground by the house occupied by soldiers.

Today’s demo was characterized by an escalation in IOF violence compared to recent weeks.