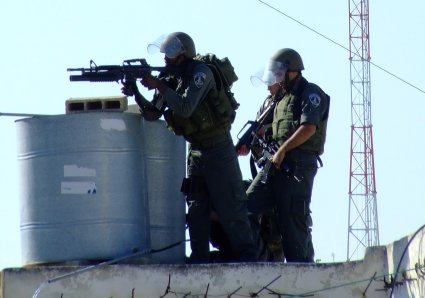 The demonstration against Israel’s apartheid wall in Bil’in today was resolute, if small. Protesting against the construction of the barrier that is effectively annexing land to Israel for the use of Jewish-only settlements (illegal under international law), the villagers were once again joined by Israeli and international supporters — about 100 demonstrators in total.

Reaching the gate that leads to Bil’in’s agricultural land (now annexed behind the Israeli construction) the protesters were stopped by Israeli soldiers. The troops blocked the gate with a jeep and razor wire, waving their billy-clubs menacingly. Others took a higher position on a ridge of the patrol-road that is part of the construction that the International Court of Justice has ruled illegal.

After a few minutes of chanting against the wall and the Israeli occupation, the demonstrators were attacked by soldiers throwing concussion grenades. A few of the local teenagers retaliated by throwing stones at the well-armed troops. The situation escalated when the soldiers on the ridge started shooting tear-gas canisters and rubber-bullets at the demonstrators, most of whom retreated. 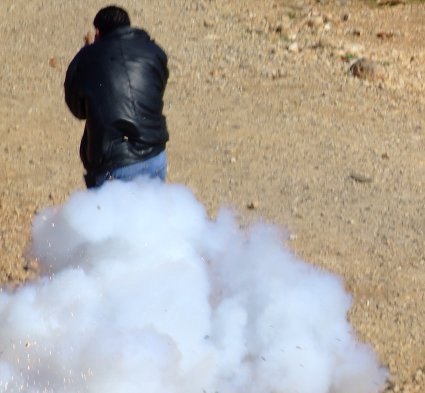 Falling back to the village proper, some of the international demonstrators observed soldiers occupying the roof of a Palestinian home, using it as a vantage point from which to shoot at local children. The children were mostly throwing stones at the soldiers. They do this as a symbol of their rejection of the Israeli military presence in their village and their homes. The international supporters tried to persuade the soldiers to leave the village and stop their violence, but they responded by throwing tear-gas grenades.

Six Palestinians were injured by rubber-bullets, tear gas canisters and shrapnel from the concussion grenades.