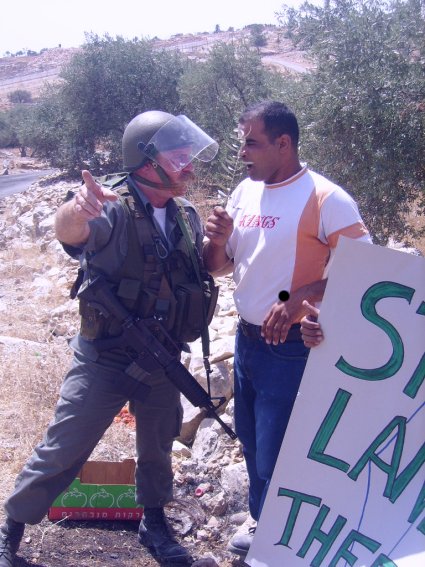 from a demonstration on 8th September this year

Bil’in peace activist Ayad Burnat, who was arrested at a peaceful demonstration in Bil’in last Friday has been released from Ofer military prison on NIS 4,000 bail. He was detained for four days on the false charges of violating a military order, causing property damage to the apartheid wall and assaulting a military officer. The IOF has yet to issue an indictment or any evidence of these charges.

During the almost two-year long campaign of weekly protests against the apartheid wall cutting though their land, countless villagers from Bil’in have been targetted for arrest by the IOF. Last week four non-violent activists were seized from their homes in the middle of the night by the IOF and held for nearly 24 hours ‘for a chat’ about their role in the weekly protests. Despite this campaign of intimidation the spirit of resistance in Bil’in refuses to die.