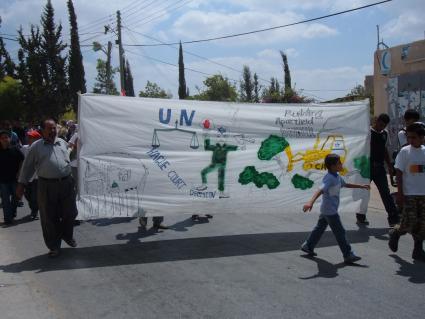 Friday afternoon, the first of September 2006, the non-violent Bil’in demonstration began as it has every week for over 18 months, with Palestinians, Israelis and internationals today totaling about 150 people, proceeding towards the illegal Wall constructed within the boundaries of Bilin’s land.

After the demonstrators marched towards the gate in the wall, they met a group of Israeli soldiers on the main road just few hundred meters from the center of Bil’in with a large tank capable of shooting liquid at high pressure. When the front line of non-violent demonstrators arrived in front of the tank, the Israeli Occupation Forces announced through loudspeaker that the area was a closed military zone. After announcing this, they retreated behind a large tank which contained a mix of blue chemicals and water, as used against Bilin demonstrations in the preceding weeks. Then they began to spray the front line demonstrators with this chemical mix. 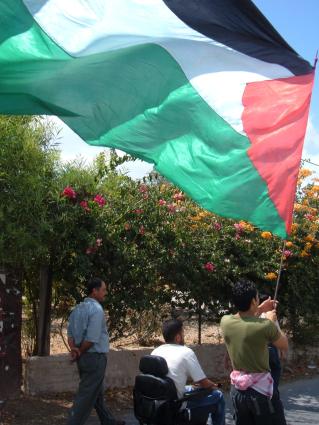 Afterwards, a line of Israeli soldiers pushed the demonstrators with their shields. One Palestinian was detained in the process and de-arrested by a group of Palestinians and Israeli activists after he was taken to the jeep. Many other demonstrators remained further behind on the road, but within a few minutes some were hit with bean-bag bullets, by several IOF troops located within a hollow house located to the south of the road, and behind the front lines. In all, eight Palestinians, one journalist, four Israelis and one international were injured by the soldier’s aggression. 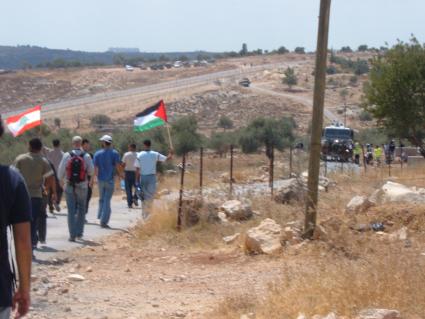 Israeli soldiers rushed into the village firing rubber bullets and teargas canisters, one military jeep arrived and supplied soldiers with more equipments and ammunition. Other weapons were also used – once again, Bil’in seems to be a testing ground for new types of “less lethal” weapons. One Palestinian and one Israeli were also hit with a sponge bullet, which places needles within the skin and sucks out blood. Additionally another Palestinian was hit with a rubber bullet during today’s demonstration 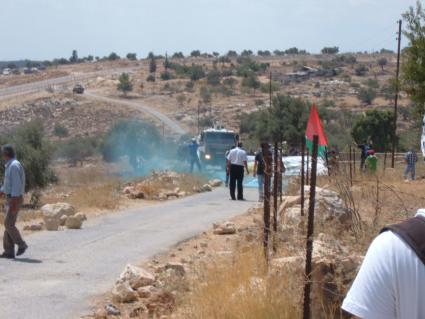 Tear gas and sound bombs were also used to disperse the demonstrators. 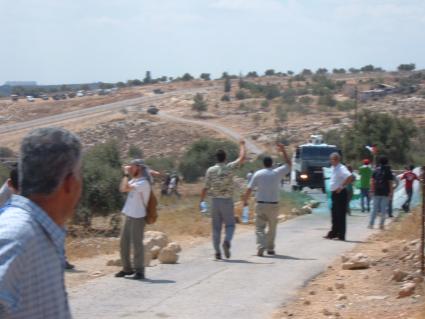