Border Police forces evacuated left-wing activists and three Palestinian families from the West Bank village of Bil’in who occupied a building Thursday in the Matityahu East neighborhood of the Jewish settlement of Upper Modi’in.

The squatters claim to possess documented proof that the property, which was built by Israeli contractor Heftsiba, and the land on which it is built is rightfully owned by Palestinians.

The High Court of Justice issued an injunction barring potential dwellers from entering the home while the question of rightful ownership is being deliberated in court. 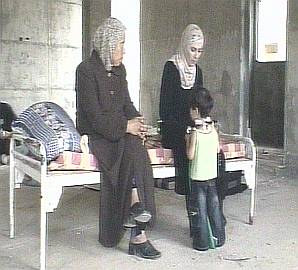 Currently, 80 Jewish families live in Matityahu East, the neighborhood which continues to absorb additional Jewish families despite the injunction and with little interference from the authorities, the Palestinians say.

“This property, which is already within the confines of an unauthorized building project, is on private land,” said Mohammed Al-Hatib, one of the Palestinians who took residence in the building. “The state admitted before the High Court that this is private land.”

“After the Supreme Court ruling, it is forbidden to bring in new residents, and they continued doing so anyway,” Al-Hatib said. “Just as it is permissible to defend the interests of settlers in the area, we deserve to have our rights protected.”

“We moved into this place because it’s a beautiful territory and a wonderful area,” he added. “I sold my home in the village and moved here. This isn’t Matityahu East but Bil’in West.”

“[The ultra-Orthodox neighbors] chose to be my neighbors,” Al-Hatib said. “We knew we were coming to an area that is no picnic and I hope it will be quiet. We heard that they were planning a demonstration against us.”

6th July: One of three Palestinian familes moving into the shell of a house being built for Jewish colonists. Three families from Bil’in moved into the home currently under construction in the Modiin Ilit colony, built on their village land. (AFP/Abbas Momani)

In response, the Israel Defense Forces’ civil administration office in the territories said that the entrance of Palestinians into the building “is illegal and unauthorized.”

The documents which the Palestinians presented which are said to prove their ownership of the property is “an appeal which has yet to be accepted in the High Court of Justice.”

“It still does not prove that this is their property,” the civil administration office said. “We transferred the matter on to the army and the police and they are aware that we are talking about an illegal act.”

Prior to the evacuation, security forces were at the scene awaiting a decision by the IDF division commander and the civil administration office as to how to confront the squatters.

Municipal officials in Upper Modi’in say they have no connection to the affair, accusing the would-be inhabitants of attempting to apply pressure on the High Court prior to Sunday’s hearing over construction at the site.

“If the Arabs [in the structure] request that we provide them with services, we’ll have a problem on our hands,” said a source in the Upper Modi’in municipal council.

Bil’in residents asked the police to prevent the Jewish families from moving into the apartments. The police replied that they could not act without a court-issued warrant and that the Palestinians either had to produce a warrant on their own or file a complaint.

In response, some residents sat down in front of the entrance to one of the apartments. Police arrived at the scene after attorney Michael Sfarad, who represents the Bil’in residents, issued a request to the IDF’s Binyamin regional commander.

Sfarad let it be known that if the police did not enforce the court’s ruling, he would file a court motion accusing law enforcement of ignoring judiciary authority.

The police were unable to prevent the new Jewish residents of the apartment from unloading their belongings and furniture from a moving truck.

For many more pictures, see the report on Indymedia Israel (Hebrew).