After prayers at Bilin’s mosque, male worshippers spill from the modest building and begin the short walk to the West Bank barrier running close to the village. 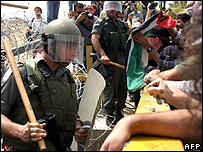 The demonstrations at Bilin have become a weekly Friday ritual

Every Friday for the last 15 months, members of the community have marched along the village’s winding tarmac road past the olive orchards and up a steep hill to where the barrier is protected by helmeted Israeli soldiers in full riot gear.
For the 1,700 villagers, the protest has become an article of faith.

According to Abdullah Abu Rahma, 35, the organiser of the weekly protest, the barrier annexes about 60% of the village’s land, cutting farmers off from their fields, making it almost impossible to make a living.
”The wall is a catastrophe for the village,” says the 35-year-old Arabic teacher. ”We must destroy the wall and we will protest until it falls.”

Swelled by a number of Israeli and foreign peace activists, the weekly protest is the longest running demonstration against the barrier in the West Bank. Each week, the protesters are met by the Israeli troops and a face-off ensues.

Chanting slogans, the protestors clank stones on a waist-high yellow metal gate a few feet away from soldiers protected by three armoured military jeeps. The demonstrators say they want to access the village’s land on the other side of the barrier.

While billed as a peaceful demonstration, the protest normally ends in violence – with both sides accusing each other of provocation. 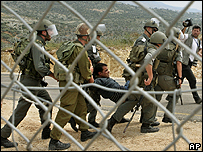 On the Friday I attended the march, it was not clear which side started the violence. But within minutes, the protestors were running for cover from the rubber bullets and stinging tear gas.
Some teenagers, with slings, crouched behind rocks, before briefly standing up and hurling stones at the Israeli soldiers on the other side of the barrier.

The Israeli army only responds to protect the barrier or when stones are thrown at soldiers, says army spokesman Captain Jacob Dallal.
“The protestors are only interested in provoking the Israeli army,” he adds.

Two settlers from a nearby settlement standing on the Israeli side of the barrier, provoked a furious response from some of the protestors. ”It’s our land, it’s our land,” one man cried, as he ran up the hill to get closer to the settlers.
But for many Palestinians, the 685 km barrier, which annexes 8% of the West Bank and puts East Jerusalem on the Israeli side, amounts to a land grab of territory earmarked for a future Palestinian state.
The International Court of Justice issued an advisory ruling in 2004 that the barrier breached international law where it is built on occupied territory and should be dismantled.
”All over the world people think that the Palestinians are terrorists,” says Rateb Abu Rahma, 40, a university lecturer. ”All we want is our rights.”

In the last year, Bilin’s villagers have seen some successes. Represented by Tel Aviv lawyer, Michael Sfard, the residents have challenged the route of the barrier round their village. Their case will be heard by the Israeli High Court later in May.

They have also secured a temporary ban on a nearby settlement continuing its construction work on 750 new housing units. The villagers say the construction is taking place on their land.
By aligning the villagers with Israeli and foreign peace activists, many of the protestors believe that the success of the demonstration has been in its broad appeal.

“People turning up from all walks of life is the heart of this demonstration,” says Israeli Yuval Halperin, 26, a book editor from Tel Aviv.

For some of the protestors, the Bilin demonstration represents a new way of tackling the Israeli occupation of the West Bank.

Mansour Mansour, 29, believes that the protests at Bilin can be repeated successfully across the West Bank.

”Palestinians believe that ending the occupation is their right,” he says. ”But it is only when we start asserting our right that the occupation will end.”