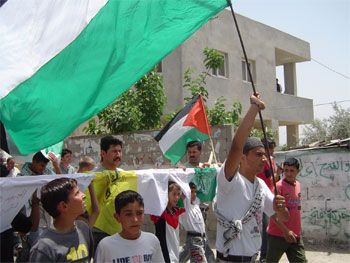 At today’s demonstration in Bil’in, on May 26th, Israeli soldiers once again deliberately targeted peaceful demonstrators. As demonstrators attempted to cross razor wire, heading for the Bil’in village land annexed by the Israeli barrier, the soldiers threw sound bombs and tear gas grenades directly at them, causing several injuries. This violence was unprovoked by any stone throwing.

The demonstration had started with about 100 Palestinian, Israeli, and international protesters singing and chanting. They headed towards the gate the Israeli military has installed in the annexation barrier. The theme of the demonstration was a call for unity between the Palestinian factions. A banner carrying the flags of the main Palestinian political factions was carried, with a large Palestinian flag above them all as a message that unity against the Israeli occupation is above political differences. When we go there, the way was blocked by two of the soldier’s jeeps, and a large group of soldiers in riot-gear. Attempts were made to pass, but the soldiers prevented this with their clubs and the jeeps.

Abdullah flies the flag near the occupation fence

After about 10 minutes of trying to get past in this way, the demonstrators started to walk along the fence. When they got to a section in the barbed wire that was less thick than the rest, they started to calmly lay rocks and scrap metal on in so they could pass onto the military road that the military have ripped-up from the land of Bil’in to install. The demonstrators intended to pass to access the stolen village land. This was prevented by several soldiers in riot-gear who arrived quickly. The demonstrators did not have the numbers for another attempt at crossing which may have been successful while the soldiers were busy with the first attempt. 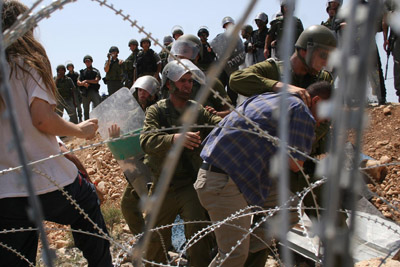 Three international activists from Germany, Sweden, and the US were injured by soldiers who threw tear-gas canisters directly at them. One was admitted to hospital in Ramallah. At least two Palestinians were shot with rubber bullets – one 17-year old was hit in the head.