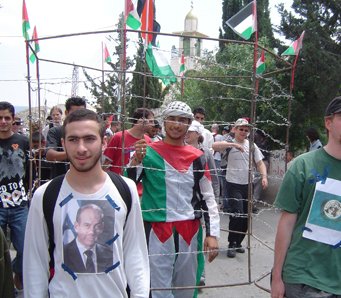 The non-violent demonstration against the Apartheid Wall on the land of Bil’in village this week was themed around the economic siege of Palestine by western powers. Israeli and international activists with pictures of western leaders taped to their chests carried a barbed-wire cage in which a Palestinian dressed in Palestinian flags was symbolically trapped. This was to signify the fact that Palestine is being made a prison created by the Israeli state and it’s western financiers.

The demonstration reached the fence gate which was closed to prevent the villagers accessing their own land. As has been the case for the last few weeks, the Israeli military enforced the closure of the gate by lining up jeeps and Border Police behind it. The demonstrators with the cage tried to open the gate and pass, but were prevented by the Border Police who beat those who got close to them with clubs. After a short while of trying this, the demonstrators gave up and instead dumped the cage on a jeep. 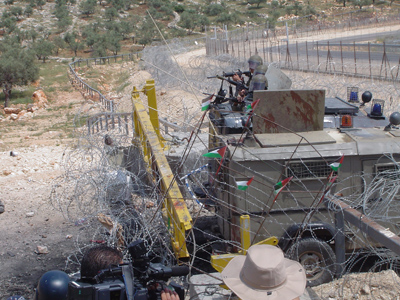 As was the case last week, the chanting group of demonstrators was broken up when the Border Police threw sound bombs at us. In response, several shebab from the village started throwing stones at the soldiers, who then opened fire on them with rubber-coated metal bullets. Most of the demonstrators moved out of the way of this unequal crossfire, shouting at the soldiers to stop firing at children, or talking to them in Hebrew to the same effect. Some from the village Popular Committee convinced the shebab to stop throwing stones. The demonstration regrouped and some tried to start a noise demo (banging in rhythm on a metal barrier which is part of the barrier), but the soldiers tried to arrest one of them – an international activist. Israeli international and Palestinian demonstrators prevented the arrest, simply by piling on the international. The soldiers gave up after a short while.

After a while, the demonstration was declared over by the Popular Committee. The demonstration left peacefully, making sure that the military jeeps were prevented from following us. Shebab from the village exchanged stones with tear gas and rubber-coated metal bullets with the soldiers.

No one was arrested this week. One Israeli demonstrator was mildly bruised (we think by a ricocheting rubber-bullet).