By Laila El-Haddad
From AlJazeera.net

A Palestinian man has drowned in the West Bank after getting entangled in the separation barrier’s barbed wire during flash floods, medical officials and witnesses say. 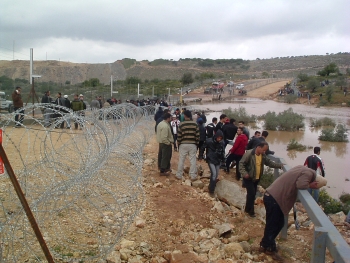 According to witnesses, heavy rains followed by flash foods washed away two brothers, Eyad and Raad Taher, in the West Bank village of Bil’in early on Sunday morning.

The two men, from the village of Bait Annan in the West Bank, were passing through Bil’in on their way to Ram Allah via an Israeli-built road connecting the two areas, when they were washed away by the flood waters, witnesses said.

They got out of their vehicle, but were swept by the strong current in the direction of the barrier.

Raad Taher was rescued by villagers, but his brother Eyad, 26, was found unconscious, caught in the razor-wire of the barrier that separates Bil’in from nearby Jewish settlements.

Palestinians blamed the Israelis for poor road planning. The road runs through a valley between two mountains.

Palestinians say the road is aimed at serving the expansion of the nearby settlement of Beitar Illit without taking into consideration the possibility of flooding.

The earthworks of the barrier, whose route was ruled illegal by the International Court of Justice in July 2004, acted as a dam, flooding the poorly built road between the villages of Bil’in and Safa, west of Ram Allah, villagers said.

“We asked the army to allow us to drain the water, but they refused, saying they were worried the fence would collapse”

Mohammad Khatib, a member of the Popular Committee Against the Separation Fence in Bil’in, said: “Placing the road here in such a low area with no drains caused the water to pile up so high that it covered 15m of our olive trees.”

Villagers also blamed the Israeli army, who they say prevented their search party from using their equipment to try to drain the flooded area.

Residents say they were not allowed to dig a ditch next to the fence in order to drain water.

Khatib, said: “We asked the army to allow us to drain the water, and even the Israeli rescue services agreed but the army refused, saying they were worried the fence would collapse.”

Eido Minkovsky, an Israeli army spokesperson, said: “All the claims that we didn’t allow the forces to act are incorrect.”

Khatib said: “Because of the planned route of the fence, which is being built according to the expansion plans of nearby Jewish settlements, this man was killed.

“There was a humanitarian situation and lives at stake, and they refused to let us through. So how will it be when the fence is completed? We hold the occupation completely responsible for this.”

Bil’in is a small Palestinian farming village 4km east of the 1949 Armistice Line.

The planned route of the West Bank barrier comes within four metres of the last house in Bil’in and is set to take more than half of the village’s land to make room for settlement expansion.

A report published by human rights group B’tselem recently stated that the wall’s route through the village was not chosen based on correct security claims, but rather was politically motivated and designed to incorporate illegal expansion of nearby settlements.