New
Home / Reports / Protesters Hang Themselves on The Wall

Protesters Hang Themselves on The Wall

At 9:30 AM Friday morning, Palestinians and Israelis hung themselves from the annexation barrier being constructed illegally on Bil’in’s land. The protestors wrapped themselves in shrouds symbolizing the death sentence that the barrier represents to the Palestinian people and economy.

Other protestors chained their arms into metal tubes and attached themselves to the wall. Israeli soldiers beat the chained demonstrators with batons and rifle butts and wounded two of the protestors. Mohammad Khatib from the Bil’in popular committee and Yossi Bartal from Israeli Anarchists Against the Wall both sustained injuries from the beatings.

The route of the wall in Bil’in was designed to allow for the further expansion of the illegal outpost of Metityahu Mizrah on Bil’in land. The fence in this will annex the Modi’in Elite settlement block that is currently under construction. 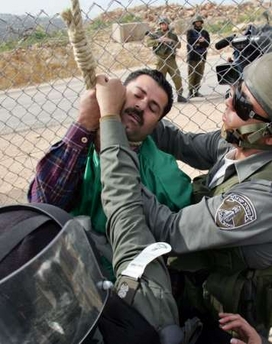 The protest in Bil’in continues and will merge with Villages weekly Anti-Annexation Wall demonstration at noon. Abud and Beit Sira villages will also be protesting at this time.