(This sign was placed by the military on razor wire in an area where the foundation for the Annexation Wall are being prepared reads: “MORTAL DANGER – MILITARY ZONE Any person who passes or damages the fence ENDANGERS HIS LIFE”)

The weekly non-violent protests against the Israelis Apartheid wall continued yesterday, when Palestinians from the village of Bil’in displayed their resistence to the ongoing theft of their village’s land.

During the protest, two Palestinian residents, including a child, and one Korean peace activist, were injured. Abdullah Abu Rahma, coordinator of the Popular Committee Against the Wall reported that one child, identified as Ahmad Zohdi Ash’al, 14, suffered moderate wounds after being hit by a rubber-coated bullet fired by the army.

Accompanied by international and Israeli activists, the crowd of approximately 200 people marched to the construction site where the Apartheid Wall is gradually cutting off the village from much of its land. The IOF and Israeli Border Police were on hand to prevent the demonstrators from crossing the barrier and reaching the recently established “Centre for Joint Struggle” adjacent to the illegal settlement outpost of Metityahu Mizrah. 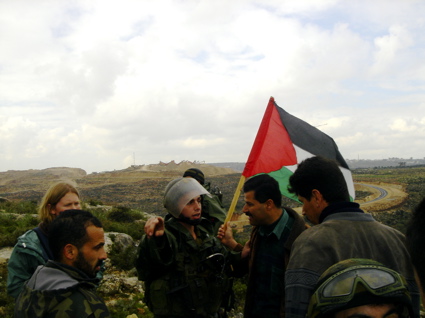 Although most of the demonstrators were quickly surrounded by the Israeli military, a small group of Israeli and Palestinian demonstrators were able to evade their control. Soon, they too were treated harshly by the Israeli Military, who detained three Israelis for approximately one hour. After securing their release, the group returned to the main group and chanted on top of a nearby gravel mound. Surrounding them was a surreal scene created by the construction of the wall; huge amounts of razor wire, destroyed agricultural land, and soon-to-be uprooted olive trees.

Approximately half of Bil’in’s lands are being isolated from the village by the Wall. The Israeli government argues that the route of the wall in Bil’in was determined purely for security reasons. However, a brief visit to the village shows this to be false.

The olive groves were in a cloud of teargas, and soldiers fired rubber-coated metal bullets at will while the demonstrators started to walked back towards the village, determined to continue the non-violent resistance against the Apartheid Wall and the Israeli Occupation.