This Week in Palestine: August 29 – September 4

Compiled by Women for Palestine

The following information has been obtained from various sources, notably the Palestinian Centre for Human Rights, the Electronic Intifada, the International Middle East Media Centre, Ramallah Online and others.

NORTHERN GAZA
Wednesday, 31 August 2005
Israeli soldiers arrested two Palestinian children from the northern part of the Gaza Strip whom they believed entered Doughti settlement, which was demolished by the army. The two children were not identified.

Sunday, 04 September 2005
Israeli soldiers arrested one resident in the northern Gaza Strip after he tried to cross the border into Israel.

KHAN YOUNIS
Thursday, 01 September 2005
A Palestinian child, Ibrahim Ghanim Al Darawsha, 11, was critically injured, after a settler rammed him in the Al Mawassi area, west of Khan Younis. The child received first aid at Al Mawassi clinic, then was transferred to Nasser Hospital in Kahn Younis, suffering sever head injuries. The settler sped away after ramming the child.

Ahmed Mohammed Al Qarra, 25, was rushed to the Nasser hospital in the city suffering of shrapnel wounds after he was injured by an explosive left by the army went off

JERUSALEM
Tuesday, 30 August 2005
Israeli Border Guards policemen and agents of the Israeli security broke into a residential building in al Suwwana neighborhood in Jerusalem, and arrested Ya’coub Mahmoud Abu Asab, 33, after breaking into his home and the homes of his uncle, brother and several apartments in the building. Ya’coub was transferred to Al Maskoobiyya detention facility in Jerusalem. Soldiers ransacked the home and confiscated video discs, CDs, a computer and other equipment. Troops interrogated several members of Abu Asab family.

Israeli soldiers arrested two Palestinian residents, east of Jerusalem, and attacked a reporter working with WAFA. Rasem Abdul-Wahid, The two residents, along with other reporters and peace activists, were protesting in front of the court against the trial of human rights and civil society activists identified as Ahmed Maslamani, Nasser Abu Khdeir and Rasem O’baidat.

Wednesday, 31 August 2005
Israeli soldiers arrested Mohammad Kayed Al Yamani, 26, from Hebron, at Qalandia checkpoint as he was heading to Ramallah.

Thursday, 01 September 2005
Israeli soldiers sealed off the Qalandia military checkpoint between the West Bank city of Ramallah and Jerusalem in a step that would tighten the Israeli grip on the Palestinian crossings between north and south of the West Bank.

BETHLEHEM
Monday, 29 August 2005
The army arrested Anwar Asakra 37 from Al Asakra village east of Bethlehem. Troops stopped Anwar at Al Kontener checkpoint, which blocks the eastern entrance of Bethlehem, detained him for 2 hours and confiscated his ID card. He was then arrested and taken to an unknown destination.

Soldiers stationed at the container checkpoint, which blocks the road linking the north of the West Bank with its southern part, detained and assaulted Jafar Ghadatha 27 from Nahaleen village near Bethlehem as he was going back home on Sunday afternoon. Soldiers then beat him badly before they let him go. Passengers at the checkpoint called the ambulance which took him to the Beit Jala hospital for treatment. He had sustained wounds and bruises in several parts of his body.

HEBRON
The Hebron Reconstruction Committee, in the old city of Hebron, reported that residents of the old city are suffering from the presence of 400 settlers who live there and who are heavily guarded by the army. Their presence is causing daily tension in the city particularly because of the repeated attacks carried out by extremist settlers groups against the city’s Palestinian residents and their properties.

The Committee reported that the residents in the old city are facing harsh living conditions while the settlers continued their attacks and controlled several stores and buildings, especially buildings adjacent to their outposts.

Nearly 800 stores in Hebron have been closed as a result of the attacks. Some of these stores are controlled by the settlers, while 2,200 stores have become inaccessible to the residents as a result of military roadblocks and the presence of settlers outposts.

Recently, Israeli soldiers blocked the entrances of the old city with concrete blocks and iron gates as well as barbed-wire, turning the old city into a big prison and the army is barring Palestinian residents from using several streets in the city, such as Al Shuhada Street, Al Shahla Street, Bab Al-Khan area, and the Old Clothes Market, while the settlers have free access.

The army has also levelled several ancient buildings after barring the Hebron Reconstruction Committee from preserving the buildings, which have historical significance. In spite of these military procedures, the Committee managed to reconstruct 650 flats for the residents, and is currently reconstructing 120 other flats. The committee is also attempting to limit the expansion of illegal settlement outposts, which are surrounding the Palestinian homes and ancient buildings, and is also attempting to help the Palestinian families in that area by providing them with health insurances, and other social services. It has also helped some residents to create projects, which may help to improve the economic situation of the residents.

Monday, 29 August 2005
Israeli soldiers attacked and badly clubbed Hijazi Kamel Al Hammoury, 19, near Al Dabboya settlement in Hebron. He was hospitalized after suffering bruises and fractures to several parts of his body. Soldiers have attacked and harshly clubbed 45 residents in Hebron, including international peace activists, since the beginning of August.

Tuesday, 30 August 2005
An extremist settlers’ group of the Ramat Yeshai illegal settlement outpost, in Tal Rmeida neighborhood, in the center of Hebron, burnt farmlands planted with olives, almonds, and grapevines. Firefighters tried to extinguish the fire which had already burnt dozens of trees.

Wednesday, 31 August 2005
Israeli soldiers decided to close the Ibrahimi Mosque in Hebron, barring Muslim worshipers from entering it. This is in spite of the fact that Thursday marks a Muslim feast. However, Jewish worshippers were allowed to commemorate a Jewish feast on the same day.

Saturday, 03 September 2005
The Israeli army took over one house in the old city of Hebron belonging to Amjad Al Rajabi and turned it into a military post after locking the family in one room.

In a separate incident, soldiers sealed all the roads leading to the Hebron University and held scores of residents at the checkpoints; most of the detained residents are students of the university.

Fifteen soldiers, armed with rifles, machine guns, took over the fourth-floor apartment. The apartment is home to 16 members of the Rajabi family, at least half of them minors. Rajabi and his wife, their children and his son Nabil and his children, live in the house. Soldiers ordered most of the family members to leave but kept hold of three of Rajabi’s sons, Nabil, 30, Raja’i 19 and Najah, 13 in the apartment. These three were used as human shields during the soldiers’ stay, against their will.

JERICHO
Monday, 29 August 2005
Israeli soldiers imposed a curfew over the village of Fasayel, north of Jericho
Soldiers invaded the villageand imposed a curfew barring the residents from leaving their homes. Soldiers threatened to shoot any resident who leaves his home.

TUBAS
Tuesday, 30 August 2005
The army invaded Bardalah Village east of Tubas near Jenin and conducted house-to-house searches and forced the residents out. They collected the numbers of their ID cards.

Sunday, 04 September 2005
Israeli soldiers installed a sudden military roadblock, north of Aqaba village near Tubas. Soldiers stopped dozens of vehicles and searched them while inspecting the identity cards of the residents.

Tuesday, 30 August 2005
The army levelled the house of Ahmad Tayyim from AL Fondok village east of of Qalqilia.

Friday, 02 September 2005
The Israeli army invaded the village of Azzoun near Qalqilia.

Troops sealed the entrance of the village, broke into and searched the homes of Ra’ed Saleem, Rami Sokkar and Ahmad Abu Asab.

Sunday, 04 September 2005
Israeli soldiers detained Mohammad and Mahmoud Habaiba, who were driving on the Arraba – Jaba’ road west of Jenin and interrogated them for 30 minutes.

TULKAREM
Tuesday, 30 August 2005
The army arrested two residents Ahmad Abu Safia 20 from Tulkarem while heading to AL Najah University in Nablus. They were arrested after soldiers had installed a checkpoint on the Nablus-Tulkarem road.

Also, at another portable checkpoint installed near Araba village, south on the West Bank city of Jenin, troops arrested Nazeh Ja’ar 20 from Tulkarem and took him to unknown destination, local sources reported.

The Army invaded Bal’a village east of Tulkarem, and stormed the residents’ houses. Troops conducted military searches in the village, and broke into the homes of Fawaz Khader, Ala Mohamed, Mohammad Mohammad and Akrama Barabra, and several other surrounding homes. Resident Hayati Salamah, 28, sustained internal bleeding in the head after falling from a cliff while being chased by soldiers.

Saturday, 03 September 2005
The Army stopped scores of Palestinian cars at the southern tunnel road which connects the West Bank city of Tulkarem with its surrounding villages, local sources reported. Soldiers are still delaying the cars and detaining the people, especially school students, without any reason.

Israeli soldiers installed a portable checkpoint at the main entrance of the West Bank city of Tulkarem. Soldiers stopped vehicles, and held and interrogated several residents, but no arrests were made.

The Israeli army invaded the village of Dir AL Ghsoun, north of Tulkarem and broke into the homes of Zaher Hamdan, Hahar Hamdan and Maher Hamdan, after forcing their families out.

Friday, 02 September 2005
Israeli soldiers fired gas bombs and concussion grenades at dozens of residents, and International peace activists, before they even started their weekly peaceful protest in Bil’in village, near Ramallah. The army invaded the village, directly after Friday prayers were concluded, one hour before the planned time of the protest and arrested three peace activists. The soldiers placed a curfew on the village.

NABLUS
Monday, 29 August 2005
The army sealed off the West Bank city of Nablus and blocked the movement of residents, ambulances and medical teams.

Wednesday, 31 August 2005
Israeli authorities decided to annex 1000 Dunams of family orchards which belong to residents of Dir Al Hatab and Azmout, east of Nablus. Soldiers placed banners at the entrance of the village informing the residents of intentions to annex farmlands which belong to the residents. The lands belong to the families of Hussein, Hammad, Shihada, and Ismail, from Dir Al Hatab, and to residents Fleih and Faleh Abu Haasan, from Azmout village. The residents have not been allowed to enmter their lands since 2000. Settlers in the nearby Alon Moreh settlement burnt dozens of olive trees last month after barring the residents from reaching their orchards. Residents fear that the annexation orders are part of a plan to expand the settlement in order to place news settlers who were evacuated from Gaza.

Thursday, 01 September 2005
Soldiers arrested a 16-year-old Palestinian child, along a road south of Nablus claiming that he was armed with a makeshift rifle and a magazine.

Saturday, 03 September 2005
Israeli soldiers invaded Balata refugee camp in Nablus and broke into the home of Abdul-Hameed Al Teerawy, searching for his son Jamal, who works as a P.A security officer.

Israeli soldiers arrested Amin Ahamd Bsharat, at Zaatara checkpoint, near Nablus as he was heading back to his village Tammoun near Ramallah. Bsharat was taken to an unknown destination.

Sunday, 04 September 2005
Israeli soldiers invaded Askar refugee camp, near Nablus, and conducted military searches of homes. No arrests were made.
Women for Palestine is a network of Australian women who stand for nonviolence and human rights in the Middle East. 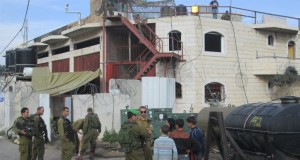 Settlers move into the Rajabi building in Hebron