Settlers move into the Rajabi building in Hebron

On Sunday 13 April 2014 in the early afternoon, Israeli settlers with assistance from the Israeli occupation forces started moving into the so-called Rajabi building in Hebron. After seven years of litigation, on 11 March 2014, the Israeli Supreme Court handed over the building to the settlers despite previous court rulings that said that the relevant purchase documents and power of attorneys had been forged.

Local Palestinians voiced their fears that the creation of a new settlement will cause further violations of their rights and violence against them. During 2007 and 2008, when settlers were dwelling in the building, the community witnessed multiple attacks by the settlers as well as routine house searches and arbitrary detentions by the occupation forces. Following their eviction by the Israeli police and army in December 2008, the settlers went on a rampage torching Palestinian property and assaulting Palestinians.

HRC staff contributed to this report. 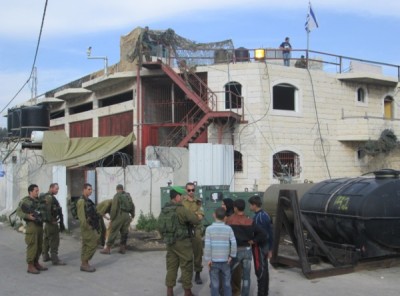