New
Home / Journals / Does anyone care?

The demonstration of Bil’in last Friday was a direct message to the UN, I think that message was “The UN is blind to see the crimes against Palestinians and cannot rule against the Israeli government, because Israel is shutting everyone up”.

16 Internationals and Israelis (the number of the security council members of the UN) were at the front line of the demonstration, blindfolded, with Israeli flags over their eyes, strips of tape over their mouths, and UN posters attached on their shirts. As soon the demonstration reached the barbed razor wire where the Israeli military was standing fully geared, the 16 Internationals and Israelis played catch with a ball painted with the color of the Palestinian flag.

One of the farmers of Bili’n managed to stick a sign “this weapon kills peace” on a soldier’s weapon. Eight soldiers rushed after him, but the demonstrators stayed calm and continued chanting and singing. After about 15 minutes, one of the local coordinators decided that the message had been conveyed, and then the demonstrators took a side road, which leads to the construction site.

The Israeli army fired sound grenades and teargas into the crowd. I was running backwards to avoid being hit with the teargas canisters. A 61-yearold woman was shot with a teargas canister on the back of the head and taken to the ambulance. I was standing behind a group of demonstrators watching some of the Israeli army dragging some protestors on the ground after we were pushed back.

A group of seven soldiers were in the village firing rubber bullets at children who were throwing stones. But no stones were thrown for at least 15 minutes after the soldiers started to fire tear gas. Later they began firing live ammunition. I told a friend of mine we should go to the place where the soldiers were shooting to see what’s happening; we decided to go together!

Two soldiers were firing live ammunition at kids inside the village, I immediately shouted in Hebrew “Don’t shoot!” We walked quickly towards the soldiers and blocked them from shooting; we were standing with both hands on the back of our heads. While passing some phrases in Hebrew to my friend, one of the soldiers took an aiming position at the other side and shot a round of live ammunition at the children.

After 10 minutes, the rest of demonstrators were pushed back into the village where I was standing, as the soldiers fired teargas and sound grenades. More soldiers arrived. I went to the ambulance for treatment, because I had inhaled teargas, and came back after 10 minutes to sit on the ground with the rest of demonstrators, blocking the Israeli army from proceeding inside the village.

While we were all sitting on the ground, the army used their shields to attack the demonstrators. One soldier grabbed my shirt and said, “You are next”. Four soldiers rushed between the houses to arrest some children and occupied a rooftop of one under construction to shoot rubber bullets. I volunteered to join a group of Internationals and Israeli activists to go to the sight and try to stop the army from shooting.

The demonstration lasted for more than three hours before the committee against the Wall called it off for that day. 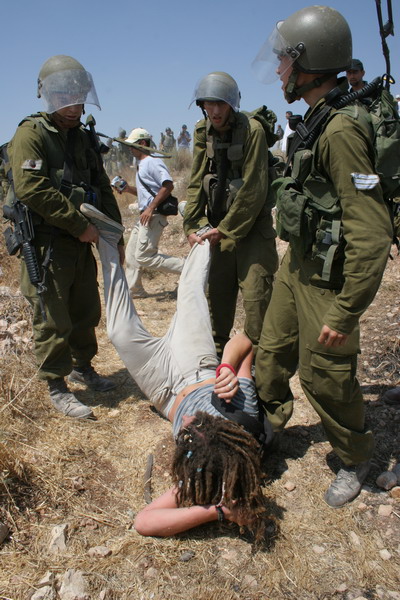 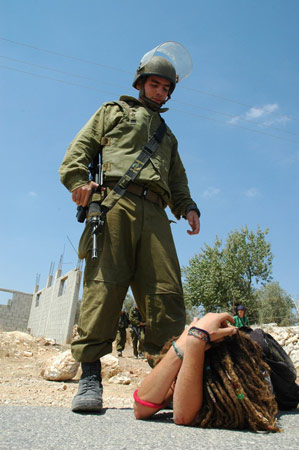