Palestinians in the Occupied Territories are not allowed to visit their relatives in prison, so hearings in Israeli military court are the only opportunity for many families to see their sons, brothers and fathers. Linda and I were able to sit with Lutfiyeh and Mahmoud at such a hearing for their son Majd, arrested along with all other males in his building last spring. Majd is in urgent need of ear surgery, and it was our hope that this hearing would gain Majd access to the medical care which the prison system has so far refused to allow him. His parents had not seen him in several months.

The courtroom is in a prefab building the size of a small trailer, with about 15 chairs for family and witnesses. Prisoners are often tried in groups of three or four or five. The judge and all the court staff are uniformed soldiers. Behind us – families seem to be barred from sitting in the front row of chairs – sat two more parents waiting to see their son. More families came in and out as various prisoners were brought in and tried.

They don’t bring witnesses into military court. They don’t debate or discuss or rebut. The prosecutor, who stands near the judge, simply speaks, at some length; then the defense attorney, when there is one, speaks at somewhat less length; then the judge decides what will happen. Mostly what happens is: decisions are postponed to a later date, while the prosecution gathers evidence.

As would happen in any court, we sat for three hours waiting for Majd to appear. Lutfiyeh often stepped outside and looked through little cracks in the fencing, hoping to get a peek of her son as they brought him from the detention cell. When Majd’s lawyer entered the court and indicated Majd was next, Lutfiyeh quietly picked up a chair and moved it front and center, as near as possible to the tiny prisoner’s dock. Two days earlier we were with Lutfiyeh when her mobile phone rang with Majd’s number from prison. There is apparently a contraband mobile phone in prison which prisoners share, so Majd is able to make a phone call every few days for a couple of minutes. When his call came that day, we happened to be in a part of Ramallah where there was no reception on Lutfiyeh’s phone. We scurried with Lutfiyeh from street to street, looking for reception. We didn’t find a place in time; the ringing stopped. We sat down with some friends we had planned to meet. After a moment, Lutfiyeh began to sob. Lutfiyeh doesn’t like to cry. She prefers to laugh when she can. We all tried to comfort her. A young man who worked in the little restaurant seemed to know her situation. He spoke to her in Arabic, saying “You should not cry that your son is in jail. You should be proud.” There were other mothers at the table with us, and at least one of them frowned with disapproval at this comment.

In some ways, says Lutfiyeh, it’s harder when Majd calls. “As soon as he says Hi Mom, my heart breaks.”

I was expecting that Lutfiyeh would start to cry when she saw Majd. She did not. When Majd was finally brought in to the little courtroom, Lutfiyeh smiled at him, and she sat beaming as if she were witnessing his graduation from college. Majd had grown a beard since she saw him last, and Lutfiyeh turned to us and mouthed with pride and surprise: “He’s a man!” Same with Mahmoud: when his son came in, Mahmoud started smiling and giggling as if someone had given him a wonderful unexpected compliment or gift.

As it happened, Majd was in the prisoner’s dock along with the son of the couple behind us. They touched our shoulders and pointed out their son to us. They were smiling and beaming too.

No talking is allowed in the courtroom, so all chat between families and prisoners must be furtively mouthed and signaled.

Prosecution and defense spoke briefly and Majd’s case was postponed for six weeks. The judge had not read the materials about Majd’s health crisis. The judge did at least rule that Majd should be examined by the prison medical officers. I was taken aback that this had not already happened; Majd has been in prison since April. The ruling may be a positive step, though Linda points out that these prison medical officers are same ones who are routinely charged with assuring authorities that prisoners are healthy enough for further torture.

After the prisoners are led out, the families leap up and step outside. There are chain link fences covered with green tarp material, but the tarp has some tiny rips and cracks. If the soldiers are in a kind mood, they may linger outside with prisoners, and the families may talk for a moment through tiny rips in the green tarp. This day’s soldiers were in such a mood, so Lutfiyeh and Mahmoud and the family behind us were able to crouch down and exchange a few sentences in Arabic with their respective sons. Then the young men were led away. Linda and I were able to reach up over the fence and wave and call “Bye Majd!” Then we followed Lutfiyeh and Mahmoud as they ran over to another section of fence beyond another building, where they were able to peek through another tear in another piece of tarp and catch one more look at their son being led away, back to the bus and back to Ashkelon prison. Then the young men were gone, and everyone hugged, and we came away with the mothers and tried to comfort them in their tears. 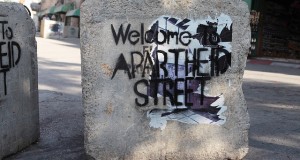