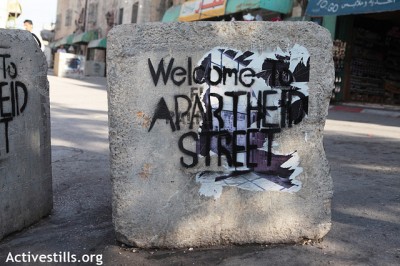 On Tuesday 21st May, Jamila Shalaldeh was found innocent by Ofer Military Court of assaulting 13 soldiers.

Jamila and her son Abdel were visibly nervous before her trial. Fortunately, the Israeli military judge agreed with Jamila and her family that the charges against her were absolutely absurd. He even laughed when he heard the evidence filed against her.

Initially, Jamila had been ordered to pay 7,000 shekels, later reduced to 1,750 shekels. On March 21st, the judge declared Jamila innocent and further reduced the fine to 1,000 shekels. Still, it’s disturbing that an innocent woman is forced to pay anything for having to endure a terrifying attack on her family and home.

On October 30th 2012 at 2am, more than fifty Israeli soldiers surrounded the home Jamila Shalaldeh shares with her three children and young grandson, near Checkpoint 56 on Shuhada Street in Hebron. The family awoke to soldiers hammering their front door and observed that many of the soldiers had positioned themselves on the rooftops overlooking their outdoor courtyard.

Jamila’s son Abdel opened the door and was immediately overrun. Abdel was beaten in his own home, in front of three of his family members, before being blindfolded and arrested. The soldiers accused him of posting a video (that showed a local Palestinian father being abused by soldiers at Checkpoint 56 for questioning the severe mistreatment of his ten year old son). They did not charge him with any crime, but said they were arresting him on suspicion of having committed a crime.

Abdel’s mother, Jamila, ran to her son, panicked and screaming. The soldiers pushed her around. Then she fainted. Abdel’s sister managed to videotape the entire incident, but Israeli soldiers forced the family to delete this evidence. Fortunately, a second video taken by a neighbour attests to the soldiers’ extreme aggression that night.

Abdel spent three days and two nights in prison. He was released in the middle of nowhere with no money and no phone. Upon his release, he was informed that his mother, Jamila, had also been arrested. She had been charged with assaulting 13 of the soldiers who had invaded their home. Jamila spent three days and four nights in three different prisons. She was released at night in an unfamiliar location.

While charges against Abdel were never filed, Jamila was required to attend a court hearing this past Tuesday. In particular, she was accused of biting two soldiers and breaking free of her handcuffs.