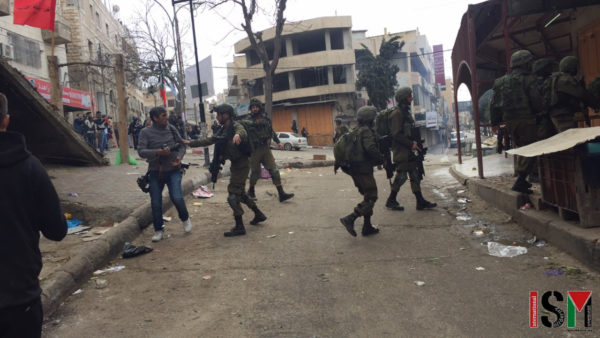 Protestors demanding an end to the illegal occupation of Al-Khalil were attacked by Israeli soldiers and border police who fired tear gas, stun grenades and other “less-lethal” weapons as they stormed the Palestinian H1 area of the city.

During the course of this invasion, the Israeli occupation forces directly targeted members of the press, who were recording their attacks on nonviolent demonstrators. Footage of this can be seen below. If you look carefully you will notice that a child was caught up in the attack. He was very near the checkpoint, directly in the line of sight of the soldiers. Despite his presence the soldiers showed no restraint.

The occupation forces invaded the Bab Al-Zawiye area of Al-Khalil for over two hours, raiding homes, stopping and searching people and cars, and attacking Palestinians. It has been reported that one person was shot in the leg, and one Palestinian man was abducted by the army. ISM activists managed to film the abduction, although the whereabouts and safety of the man are currently unknown.

It is important to note that this morning, a group called Im Tirtzu staged a rally in the occupied part of Al-Khalil to celebrate the fact that the UN Temporary International Presence in Hebron (TIPH) had been forced out of the city by the Israeli government. Im Tirtzu, which has been described by the Israeli court system as a fascist organisation, demonstrated freely in the H2 area of Al-Khalil. Even though they have a record of inciting violence against Palestinians and regularly engage in Islamophobic rhetoric, they experienced no violence or restriction on their movement from Israeli occupation forces. Sadly, this type of collusion between occupation forces and the most radical streams of the Zionist movement is all too common. This is the reality of life under occupation. 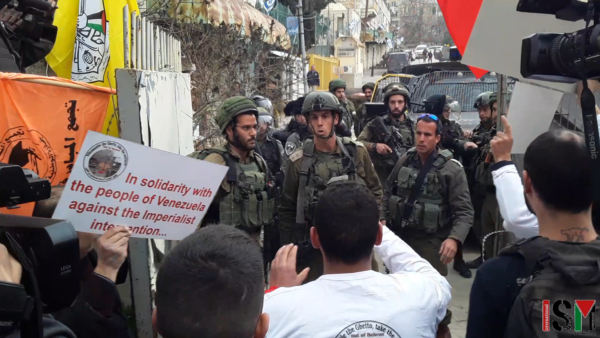 Against imperialism, from Palestine to Venezuela

Despite the occupation forces’ efforts to stop the demonstration, hundreds of people took to the streets and resisted together. It was a beautiful sight to see Palestinians on the streets together with their international and Israeli comrades, calling in unison for an end to the illegal and immoral occupation. Moments like this give us a glimpse of what can be achieved when we work together to confront tyranny and violence. Let’s keep working, lets keep dreaming, lets keep fighting. End the occupation.