Another interesting week in sunny Palestine

It’s the first day of winter term for Palestinian schoolkids. Israeli settlers from the colonies in and around Al Khalil, the Israeli Border Police, and the Israeli Defense Force, are all known for systematically impeding the passage of children to and from school. The settlers verbally harass the schoolchildren as well. These kids are of all ages from kindergarten to twelvth grade: the kindergarteners often walk hand in hand with a parent or older sibling but a few five-year-olds make the trek to school alone or with a couple of friends.

My ISM teammate, D, and I keep an eye on the army checkpoint that controls Palestinians’ passage at Salaymey, on the southeastern end of the Old City. Most of the children filter easily through the turnstiles, and through the armored inspection building, although some of the older ones are subjected to identity checks, bag searches and an occasional, not very intrusive body search.

The road leading uphill from the checkpoint to the settlement of Qiryat Arba is dusty, steep and winding and often clogged with schoolchildren; settlers in vans and late-model cars take the road too fast and many of them barely bother braking, and lean on the horn instead. Some shout angrily at the kids as they take the slope. It strikes me as inevitable that a child will eventually be hit by one of these cars. Foolishly, I get into an altercation with a speeding settler in a van; he stops, reverses furiously, slides down his window and spits at me.

A fat settler gets out of his car next to where I and D are standing, not far from an SUV in which two observers from the UN group known as TIPH–Temporary International Presence in Hebron–are also observing the checkpoint. He taunts the two TIPH women, saying, “You will be gone soon.” (Sure enough, less than two weeks later, Israeli Prime Minister Netanyahu revokes TIPH’s observation rights, and TIPH is, indeed, gone.) The settler strolls up to D and myself, smiling and filming us with his cellphone. We know this man: he’s famously violent. He often harasses international observers. Also, he carries a handgun; we have been told he has shot Palestinians, and blocked medical first responders from helping the wounded. He has never been punished for these unprovoked attacks. Our local Palestinian friends refer to him as a murderer.

I have not been in Al Khalil long. I was trained, swiftly, in the philosophy and practice of non-violent observation, by ISM personnel in Ramallah, and trained further by my teammates at an ISM base, but I’m still not ready for what I experience here daily. I am an American, from a country where, for all its faults, some form of rule of law applies, even if it’s less available for the poor, the outsider, the disadavantaged. Of course the history of the US is a long tale of theft from, and murder of, Native-Americans but I, personally, am not used to living in a police state that enforces on a daily basis the systematic robbery of land from a native people, and sets up a system of apartheid and military rule to crush ensuing dissent.

“You’re going to stay safe,” my daughter told me, very firmly, before I left for the Occupied Territories, and I assured her I would. But I had not known then what I now live every waking hour of every day: the constant pressure of passing through military checkpoints, waiting while the Palestinians in front of us are held up for five, ten minutes at a time, apparently just to make them remember who’s boss here; arguing with heavily armed soldiers or border police officers who object to our walking down a street in their presence; being held up in the market by military patrols who surround us for twenty minutes, Tavor assault rifles at the ready, when we refuse to let them take our passports. At one point they physically push us out of a checkpoint where an ISM teammate is demanding to know why a Palestinian man is being held up, for no apparent reason, for close to a half hour.

One of the checkpoints smells of tear-gas. A kid threw a rock at what is, in effect, an armored mini-fort, and the troops inside responded by firing a gas canister. 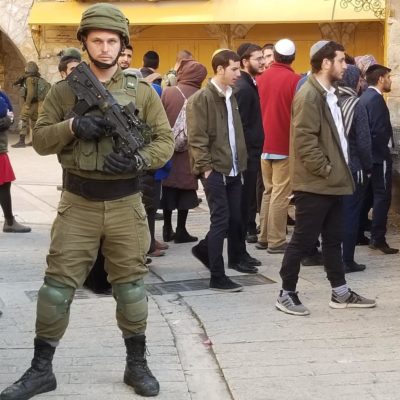 Al Khalil has been divided by the Israelis into two sectors: one Palestinian, known as H1, and the other, H2, reserved for settlers. A walled military base flying the Israeli flag glowers from a hill over the town. Four colonies: Tel Rumeida, Beit Hadassah, Beit Romano, and Avraham Avinu; have been encrusted into the heart of the Old City. Palestinians have covered the streets beneath their walls with heavy wire because the settlers routinely toss bottles, trash, even tins full of urine out of their windows onto the people below.

Most Saturdays–the Jewish sabbath–a tour guide takes groups of settlers from the Al Khalil colonies through the H1 areas of the Old City, the parts the Israelis do not live in. The tours are guarded, front back and flanks, by at least twenty infantrymen; the soldiers act as if they’re on patrol, with squaddies on point or defending the rear, guns at the ready. Though the Palestinians generally ignore the tours, I can only imagine what it must feel like, for them, to have colonists gape at the city they have not yet stolen.

Before a 1929 massacre in which 69 Jewish residents died, a small Jewish community existed in Al Khalil, but the property they actually owned constituted a microscopic fraction of what the settlers have taken. The al-Ibrahimi mosque here contains the remains of Abraham, the founder of the Jewish, Christian and Muslim faiths. Apparently seeing their presence as religiously ordained, the settlers in Al Khalil are known for adopting a particularly hard-line and vindictive attitude toward the local people.

A Brooklyn-born settler, Baruch Goldstein, who massacred 29 Palestinian worshippers and wounded over 150 others in the Ibrahimi mosque in 1994, lies buried on a hillside in H2. Some of Al Khalil’s settlers, apparently, revere his grave as a shrine.

Al Khalil may not be dying, but the Israeli occupation and its system of apartheid is taking a toll on the Old City. A good third of the storefronts on the main drag, Al Shuhaba Street, are shuttered. Every local I meet has so many stories of being detained, harassed, impeded in the conduct of day-to-day life that no one even bothers to recount them anymore, they are just how one lives in this place. The younger people, of Intifada age, know they can be jailed at the first sign of protest, and kept in an Israeli prison without trial for years under a system known as “administrative detention,” at the whim of the occupying power. And yet the Palestinians I meet in Al Khalil do not seem cowed or broken. They nurture a healthy sense of humor and, most often, a philosophical take on the situation.

The same is true of the ISM team I am living with: D, Katie, Roberto, Penny, Ed. While constantly aware of the risk–ISM members have been killed in Palestine while observing what the Israeli forces are doing–they are diligent in respecting the tenets by which they live here. These include, as well as strict adherence to principles of non-violence, a blanket refusal to guide or advise the Palestinians in any aspect of their lives, including how to survive under or resist apartheid. We are in Palestine to observe; to make known to the occupying power that its actions cannot be swept under a rug; and hopefully, to restrict through this process some of the more serious abuses of power an occupying army inevitably will commit.

On a roadside leading from Checkpoint 56 to Qeitun, in the Old City, a female settler screams at a pair of international observers from EAPPI, the Ecumenical Accompaniment Program in Palestine and Israel, who shelter in a doorway from her torrent of invective. A few days later EAPPI’s observers, citing a targeted campaign of harassment, will be withdrawn from Al Khalil. The almost simultaneous eviction of TIPH leaves only one other church group, the CPT (Christian Peacemaker Teams), as well as the ISM’s group of international observers, to keep an eye on the occupation here. This week the CPT team has not been present in Al Khalil. Ed, too, is leaving. When I quit the city in a few days time, our team will have dwindled perilously close to a size that’s too small to do its job.

This country, for all its lengthy history of massacre, religious bigotry, and exile; of water theft also, of over-exploitation and deforestation; remains beautiful. The rough limestone hills that range up and down Palestine seem to flow like a cat’s spine, khaki earth and white rock studded with olive trees under a clear blue winter sky.

One of the heights to the north of Jerusalem, a pair of hilltops separated by a shallow saddle, known as Ras Karkar, has traditionally served as common ground for the three Palestinian villages surrounding it. Recently a neighboring Israeli settlement invaded the hilltop. Even in the context of the UN-mandated territory of Palestine, where roughly three-quarters of a million settlers now live on stolen land, in illegal colonies; where a long, brutally massive wall built of cement, guard towers and razor wire cuts up the rest of the country; this was an egregious act. Now, every Friday, Palestinians from the surrounding villages and activists from farther afield meet in a valley underneath and, at least symbolically, strive to take back Ras Karkar.

Up on the hilltop, Israeli soldiers dressed in black riot gear await the Palestinians. Their rifles stick out from the cover of thorn brush, of olive trees. A handful of settlers shelter behind the military.

In the valley, an imam prays through a loudspeaker to a group of fifty or so men. Then the men start up the hill, toward the waiting soldiers. The younger among them wield slings, just as David did against Goliath in the Valley of Elah, to the west of here. Their rocks fall short of the soldiers’ defensive line. The IDF responds by firing tear-gas canisters that emit acrid, choking clouds of white smoke which the Palestinians and a couple of international observers run from, or around, as best they can. Then the soldiers fire small hard plastic bullets that whiffle shrilly past our ears. We turn away and cover our necks–these rounds are not supposed to be lethal but they can blind or wound if we are hit in head or neck.

An army drone buzzes overhead. The younger men, known here as “shabab,” try to outflank the Israelis. More teargas is fired into the valley. If the confrontation grew more dire the soldiers could fire live .22 rounds at the legs of their attackers, a practice common enough that people warn of it by shouting the English words, “two-two!”, but it doesn’t look as if this level of intensity will be reached today.

Some of the older men sit in the shelter of rocky outcrops and watch. A youth caught in a cloud of teargas doubles up, retching, blinded, gasping for breath. Another, hit in the head by a plastic bullet, is taken away by a Red Crescent ambulance. Later a car drives into the valley with food and water. Falling back from Ras Karkar the Palestinians, and a couple of ISM observers, sit on the ground to eat and drink in the sun.