Fourteen years ago the Israeli Government closed the road between Kafr Qaddum and Nablus, extending the distance to 14 km, effectively making what would be a 15 minute journey for the villagers, into 40 minutes. The protests began in 2011 to reopen the illegal roadblock, and have continued every Friday and Saturday since then. 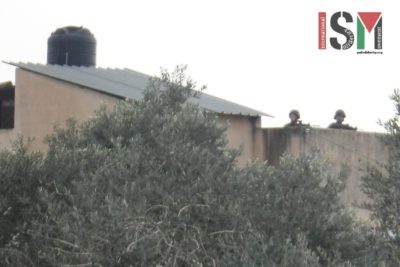 Israeli snipers were inside the village

The coordinator of the demonstration, Murad Eshtewi, was hit with a live round in the right thigh. After being transferred to an ambulance, a fellow demonstrator took his place, speaking into the megaphone.

In response to the tear gas and gunfire, the youth began throwing stones – deemed by Israel as a crime punishable up to 20 years in prison. 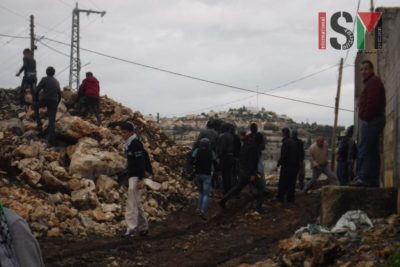 Several internationals were present, including those from ISM, IWPS, and the Press. A 65-year-old Italian national – a volunteer with ISM – was shot in her left thigh by a rubber-coated steel bullet. “I was just standing there,” she recalls, “It was good that I was turned away. I could’ve been shot in the knee.” Another young boy was also shot in the leg, and was carried off into an ambulance, reportedly in shock.

This attack on another peaceful demonstration against the illegal road block, only confirms the increase in aggression by the army. Discouraging protest by the Palestinians, and international solidarity thereof, is the only take-away from an attack like this. “They used less bombs and tear gas… But they used more bullets,” another demonstrator states.

Demonstrations by Palestinians and Internationals are expected to continue for this Saturday, and the following weekends.