This morning, schoolchildren and other passers-by encountered the Eastern Tel Rumeida checkpoint blocked in both directions and had to wait 30 minute to pass it on their way to school or workplace, while a young man was detained inside for 30 minutes.

At 7:10 on Sunday, October 21, a young man entered the Easter Tel Rumeida checkpoint and went in the concrete check-cabin inside it. ISM volunteers heard the soldiers inside this concrete check-cabin, shouting in Hebrew language very loud and aggressively to this young man from behind their bulletproof glass window. He was then ordered to wait, possibly for remote identity check. They kept him detained inside for half an hour, until 7:40. 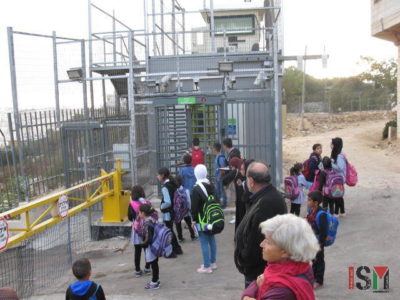 Schoolchildren and other residents could not enter and pass the checkpoint while the young man was being detained inside. Some of hem tried to slip trough a hole in the barrier gate, but the Israeli forces inside strongly forbad them to do so. They all had to wait until 7:40 before they could pass the barrier, and were therefore late for school and work. 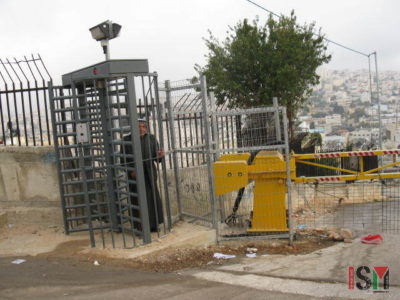 The outgoing turn-gate was blocked too. An old man and a female schoolteacher could not pass it.

First, the occupation forces inside blamed it on the electricity, and then on the unwillingness of the detained man inside the concrete check-cabin to pass the security scan inside, but ISM volunteers witnessed that it was plain harassment of the young man inside and of all the others who had to wait outside. 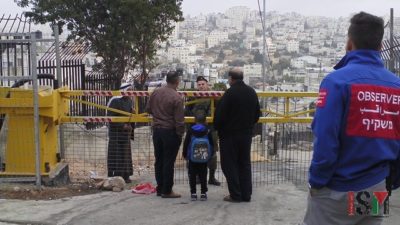 For blocking the outgoing turn-gate, there was no reason at all.

Israel’s military control of Hebron consists of settlements, settler-only roads, checkpoints and military bases. Because of this, restricted access, collective punishment and lack of freedom of movement is a part of daily life for Palestinians in the Old City of Hebron, who face settler harassment and looming Israeli military presence on a daily bases.