Yesterday at midday, hundreds of protestors marched through the streets of Ramallah to mourn the execution of Razan Al Najjer, the 21-year-old medic who was executed by Israeli forces in Gaza on Friday.

Members of the Palestinian Medical Relief Society from across the West Bank, largely students, marched with portraits of Razan. Protestors held signs calling for #JusticeForRazan and end to Israeli war crimes and the seige in Gaza. 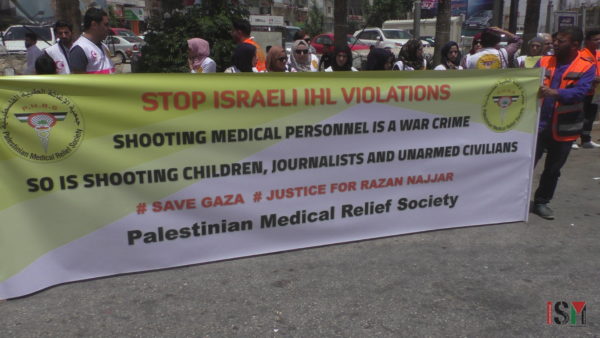 Hundreds of protestors march through the streets of Ramallah to mourn the execution of Razan Al Najjer, the 21-year-old medic who was executed by Israeli forces in Gaza on Friday (photo by ISM)

“Razan was providing first aid for people in the Gaza area and she was killed by live ammunition by Israeli soldiers,” says Dr. Muhammed Scafe, of PMRS. Dr. Scaafi emphasized that the murder of medical personel is a war crime and a breach of international law. “In accordance with the Geneva international code, medical teams have the right to provide first aid.”

Shatha Sameer Zaydya, a member of the Palestinian Medical Relief Society, says she started volunteering with PMRS when she was a student in university. “I’m from the Sarfit area. We work a lot in Safit, Nablus, and Ramallah when we can. We face a lot of attacks from Israelis, and especially the settlers in the Nablus area, who want to kill and harm [Palestinians] and make us afraid.” 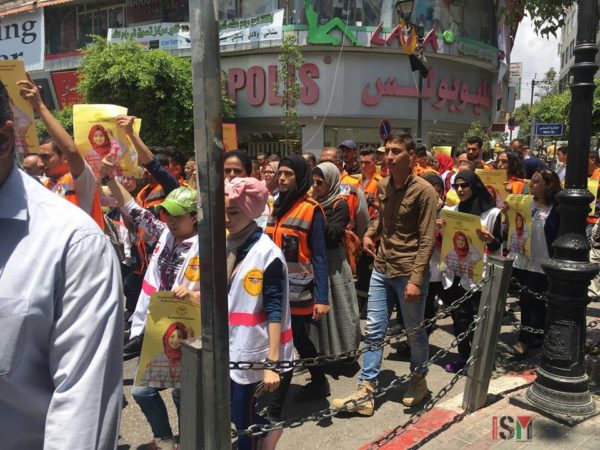 In accordance with the Geneva international code, medical teams have the right to provide first aid (photo by ISM)

Members of PMRS have been active in the West Bank and Gaza for the past 40 years. Today the organization has over 1.5 million volunteers. PMRS has provided urgent medical care to Gazans following Israeli violence 2012, 2014, and now in 2018 during the #GreatReturnMarch.

Yesterday afternoon, Dr. Mustafa Barghouti, president of the PMRS, welcomed mourners into the headquarters in Ramallah. The message, he says, of todays protest is to honor Razan and to show Palestinians in Gaza “that we are one people, that you are not alone, and that you are not going to suffer on your own.” 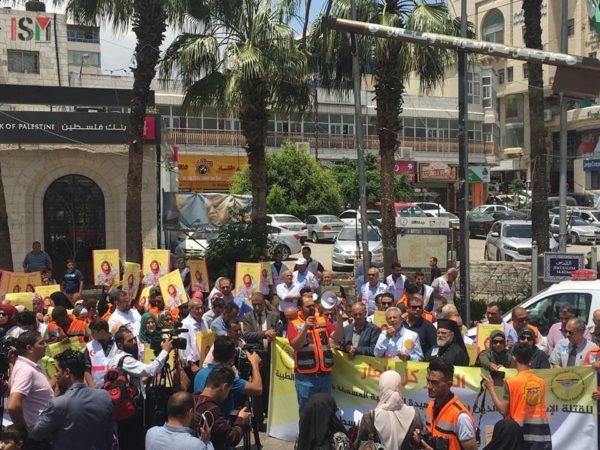