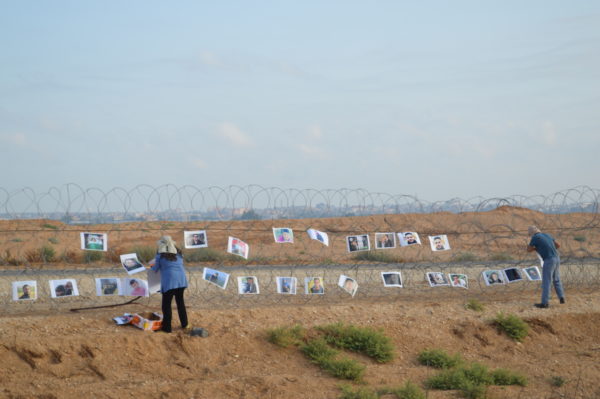 Israeli-Jewish activists, calling themselves “RETURN” hung photos of the martyrs of the Great Return March on Gaza Apartheid Fence.

The following press release was sent to Mondoweiss regarding two actions in support of the right of return that were taken by Jewish groups in Israel today:

At 6 AM today, an anonymous group of Israeli-Jewish activists, calling themselves “RETURN” hung photos of the martyrs of the Great Return March on the Gaza Apartheid Fence. The protest was done against Israel’s extrajudicial killings of protesters during the Great Return March, including journalists, medics and unarmed demonstrators.

The action was inspired by a call from the #GreatReturnMarch in Gaza for international solidarity. The RETURN activists hung portraits of Gazans murdered by Israeli forces, including the now-iconic portrait of the young medic, Razan Al Najjar. Earlier this week, Gazan professor Haider Eid wrote, “the slogan of the Great March of Return is “I want to go home.” Seventy percent of Palestinians in Gaza are refugees from cities and towns in Israel… It’s time for the world to stand up and act– to impose sanctions on Israeli industries until Palestinians are granted freedom, civil rights, and justice.

One of the activists of RETURN stated, “The Palestinians besieged in Gaza are marching home, back to the villages and cities from which they were expelled. They are marching out of the desert that Israel has transformed Gaza into and because of this, the Israeli Occupying army is murdering them in cold blood. The courage and sacrifice of these people demand of us all to stand up and ensure an end to Israeli impunity. Apartheid must end and we are the ones who must end it.”

Later this morning “Israeli Jews in Support of Palestinian Return” posted posters of Akhmad Al-‘Adinie whos family was expelled from Bir As-Saba and ‘Abd Al-Qadr Al-Khawajry whos family was expelled from Bureir – Both were murdered by Israeli soldiers as they tried to return to their homes. The posters where posted near the Mosque of Bir AsSaba, in honor of their persistence and devotion. The group calls for the return of all the Palestinian refugees in Gaza and elsewhere. 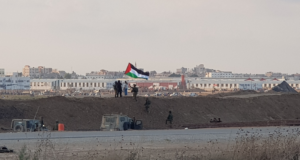