In Solidarity with the Gaza Protests: Israeli Activists Hung Posters of Slain Palestinian Protesters on the Gaza Fence 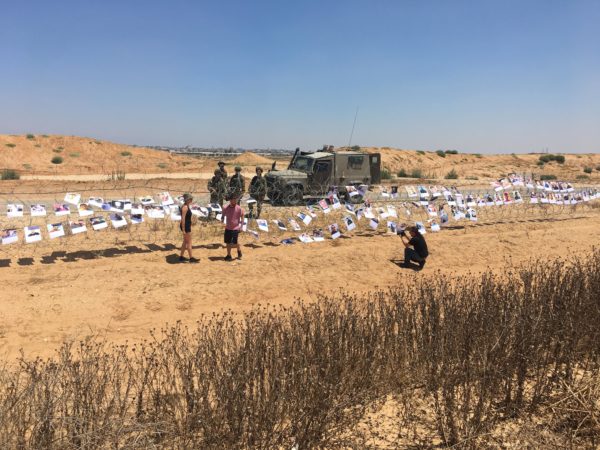 Near Khan Yunis, Gaza- 26 June, 2018- A group of Israeli activists, dubbed ‘Return’, advanced today towards the fence besieging the Gaza Strip, and hung pictures on the fence depicting Palestinians slain by the military during the ‘Great March of Return.’

The activists responded to a call for solidarity made by the organizers of the protests. Gazan organizations have requested that the pictures of the fallen protesters be hung in various locations around the world and particularly in the fronts of Israeli and US embassies, in order to support the protests and their aims. Similar actions are expected to take place globally in the coming weeks.

An Israeli military jeep arrived on the scene as the posters were being hung and demanded the activists remove them. The activists finished hanging posters along the fence and refused to remove them.

One of the activists, Omer Sharir, explained that they were aiming to protest the killing of unarmed protesters as well the siege on Gaza, and that they supported the right of Palestinian refugees to return to Palestine: “the right of return is a basic human right extended to any one who was forced to leave their home as a result of conflict” Sharir stated.

Another activist Anna said: “there is nothing preventing the refugees to return to the towns and villages from which they were forced to flee, and similar resettlement programs have been implemented in other places around the world in the aftermath of wars. I am appalled that protests stemming from such an elementary desire to return to one’s home, and from longings for a place and a homeland, are again and again met with live and lethal fire from the Israeli side.”

The activists explained that: “Every day more people are shot dead in Gaza. More the 135 unarmed protesters have already been killed and 14,000 people were wounded including medical staff, journalists, and children. The global media offer less and less coverage of the carnage that are unfolding in the Strip. That is why we felt it imperative to respond to the request to solidarity from the organizing committee, as a result of our responsibility as Jewish Israelis for the occupation and the siege of Gaza, and similarly to reinforce the goals of the protests, which is the implementation of the right of return. 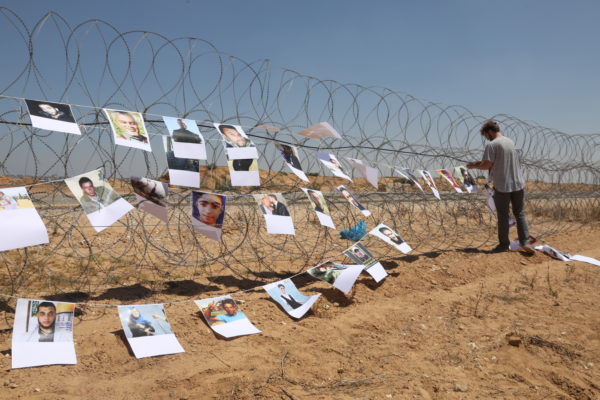 The call for solidarity by the organizers of the Great March of Return:

Last week’s action of hanging the portraits of the fallen protesters in front of the Knesset:

Last week’s action of hanging the portraits of the fallen protesters on the fence around Gaza:

Last week’s action of hanging the portraits of the fallen protesters in Be’er Sheva’, near a mosque now serving as a museum: