New
Home / Features / “I just want him to be a normal boy again’: Gaza family appeal for urgent help to support treatment of 11 year old Mahmoud who was shot in the face by an Israeli sniper

“I just want him to be a normal boy again’: Gaza family appeal for urgent help to support treatment of 11 year old Mahmoud who was shot in the face by an Israeli sniper 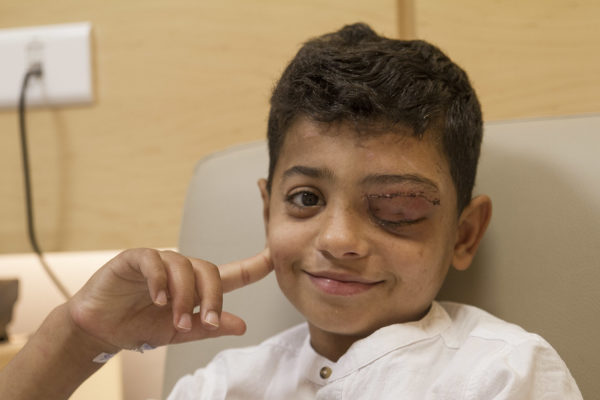 Mahmoud in hospital in Ramallah today.

Mahmoud Sawalhi is an 11 year-old boy from Gaza who was shot in the head and the shoulder with live ammunition by an Israeli sniper on the 14th May Great Return March protests. A bullet passed through his eye and out of the top of his head, and he lost both his eye and part of his brain. His heart stopped twice in the ambulance on the way to the hospital in Gaza, and he fell into a coma for 6 days. You can watch this short video showing Mahmoud in hospital the day after he was shot. 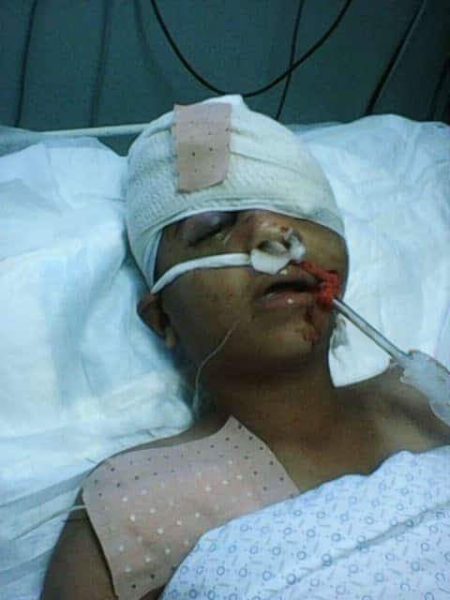 Mahmoud in hospital in Gaza in the first days after he was shot. Image given with permission by Mahmoud’s family

Three days after he was shot, Mahmoud was transferred to a hospital in Ramallah, where he has some cousins, but he doesn’t know them very well because of the travel restrictions between Gaza and the West Bank. He had only met his cousin Samar once before when she visited Gaza for a day a year or so earlier. He didn’t recognise many of the faces he saw around him when he regained consciousness. Mahmoud’s immediate family were not allowed to travel from Gaza to the West Bank to be with him at the hospital and so he was parted from his parents and close family for over two weeks while his condition was critical. The process of getting permission to cross from the Israeli authorities was difficult, and at first Feda waited 7 hours at the Erez crossing before being turned back, despite having a permit for travel to the West Bank. The Israeli authorities then eventually allowed Mahmoud’s mother Feda to travel to be with her son in hospital, and she is still here with him.

Last Wednesday Mahmoud had an operation to remove the remaining part of his eye in the socket to prepare for a possible replacement from a donor. His condition during and after the operation was critical, and the medical team knew there was a high risk of infection. He suffered from a fever after the operation, but has since stabilised and his condition is now better. ISM visited Mahmoud and his family in hospital a few weeks ago and again today. His mother told us ‘I just want him to be a normal boy again, I just want him to be a normal child again.’ Mahmoud is doing much better than when we saw him last, but he is likely to have severe brain damage and need a great deal of support during his long-term recovery. We asked him what he wants to do when he gets out of hospital and he says ‘I want to go to the beach’. Before he was shot, Mahmoud loved to swim in the sea. 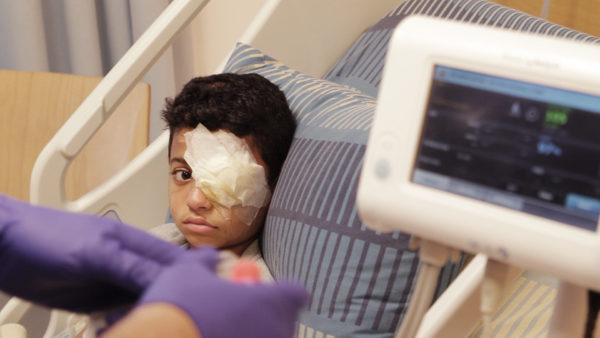 Mahmoud in his hospital bed in Ramallah in the week before his operation.

Given the conditions in Gaza where medical services have been overwhelmed with injuries deliberately inflicted by Israeli forces, Mahmoud was lucky to be transferred for treatment outside of Gaza. A WHO report for April showed that only around a third of those injured by Israeli forces in the Great Return March demonstrations were allowed to cross to Palestine, much lower than the general approval rate of 60% for medical crossings earlier this year. In 2017 the approval rating for medical exit permits from Gaza was the lowest since 2008, at around 54%, and that year 54 Palestinians died after the denial or delay of their permits by Israel.

Since the Great Return March protests began on 30 March this year, over 135 Palestinians have been killed by Israeli forces in Gaza. Head of government hospitals in Gaza, Abdullatif al-Haj, has told press that there are severe shortages of medicines. The total number of injuries is reportedly over 13,000, with over 350 seriously injured, and over 2000 children injured. Israeli forces have also been targeting medical personnel themselves. On the day Mahmoud was shot, 17 medical personnel were shot with live ammunition by Israeli snipers, and one was killed. On Friday 1st June a 21 year old medical volunteer, Razan al-Najjar was shot in the chest while treating the wounded near the fence. The sheer number of injuries in Gaza has overwhelmed the already troubled hospitals, which is why many of the seriously injured apply for a medical permit to be treated in East Jerusalem or the West Bank.

Mahmoud was one of these cases to be allowed to cross to Ramallah, but he will be forced to return to Gaza with his mother Feda as soon as his critical treatment is over. Mahmoud’s family are worried about the treatment needed for his recovery and rehabilitation longer term. It is likely that he will have lasting brain damage and psychological problems caused by his injuries. At the moment he can speak and interact, but in a limited way, and he is not expressing himself well. His family are particularly worried about his chances for rehabilitation once he returns to Gaza, because of the poor resources and medical capacity in the occupied Gaza strip.

Mahmoud’s family are appealing for international support to help in his long-term medical treatment. Maybe you can help with the following:

• His family would like advice from anyone who can offer medical consultation on the best course of rehabilitation for Mahmoud now.
• If he has to return to Gaza, his treatment will suffer, and his family do not have funds to support the complex rehabilitation he needs. Specifically they are asking for financial assistance to help cover the costs for rehabilitation equipment and treatment.
• Please contact Mahmoud’s cousin Samar: samar.sawalhi@hotmail.com if you can help in any way. 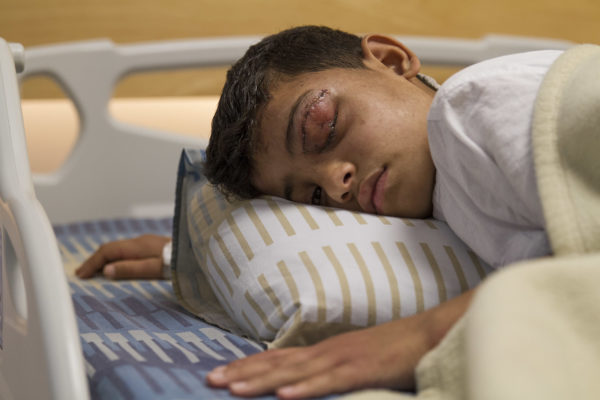 Mahmoud resting during our visit today. His family are worried about his long term recovery, particularly the brain damage he has suffered, and prospects for his rehabilitation.