Israeli soldiers close checkpoint 56 leading to the neighborhood of Tel Rumeida for an hour this morning, restricting the freedom of movement even further for Palestinian residents. Israeli settlers were celebrating the jewish holiday Purim as they paraded down Al Shuhada street and gathered outside Al Ibrahimi mosque playing loud music and drinking alcohol. Shop owners had to close due to the fear of violence from the settlers. 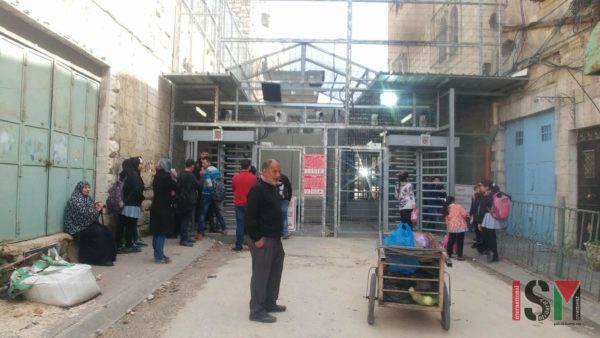 Palestinians could not reach their own homes; checkpoint 56 stayed closed long after the parade had passed. A mother was separated from her child who had passed through the checkpoint on his own before its closure. Checkpoint 55 also closed today for 45 minutes just down the road for the same reason.

An Israeli soldier told us the checkpoints were on lockdown for ‘security reasons’. When questioned further the soldier stated, “Orders come from above I cannot do anything.” When pressed about the morality of stopping Palestinian adults and children from their homes the soldier stated, “I’m just following orders, if you ask me again in two years after my service is over I will tell you something else.”

This is the second time this week that Israeli forces have locked down checkpoints for prolonged periods of time in the immediate area. The last time this happened was thanks to a visit by the Israeli defense minister, Avigdor Lieberman, on his way to the illegal settlements in and around Al Khalil, Hebron. Checkpoint closures are common in H2, Palestinians are unfortunately used to the constant inconvenience of the oppressive Israeli occupation.