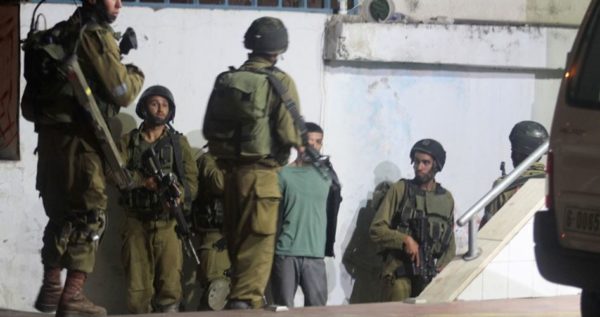 Around Yabad there are two big Israeli settlements. In the last few weeks the repressive action by the Israeli army on Yabbad’s Palestinian people has escalated. Several Teenagers have been arrested, they were taken out from their homes on night raides. Raiding his house, the Israeli army arrested 18-year-old Ahaned Abubakar at night on 13 December at 1 am. The father of Ahaned told us that fifteen Israeli soldiers were crowding around the house and
occupied the roofs of neighbouring houses. After breaking through the door with a crowbar, they got into
their house and sarched all the rooms in the first floor, waking up the wife and the five kids traumatically. They took away Ahaned without giving any explanations. Until today, the Ahaned family haven’t received any information about the reason for his arrest and the length of detention in Jalami prison. Ahaned’s father told us that in the last night
he woke up startled at 1 am, exactly a week later the Israili army’s raid. The whole family
is still in shock, the mother and Ahaned’s four younger siblings are living in pain with their brother’s absence. Abdele, the 4-year-old brother didn’t understand what was going on during the house raid. So his father told him that his brother Ahaned
went to visit relatives in Jordan, but since the night of the brother’s arrest Abdele wants to sleep in his parents bedroom.

Another two fathers of Yabad told us about the recent arrest of their 15-year-old kids, by
similar night raids of the Israeli army. Just like Ahaned’s family they don’t know about the reason for their kids arrest and the length of administrative detention in the jail, that could take up to six months.

The arrests of kids and teenagers are the latest strategy of the Israeli occupation force, focused to prevent whatever protest action and targeted to get information and control over life and houses of Palestinian people. Especially in Yabad where two settlements have been set up.
The kids and teenagers arrested without an official explanation or any opportunity to collect their personal belongings. They are normally being held incommunicado, in cramped and poorly lit cells. They are subject to continous interrogations by the Israeli Army which aims at getting as much informations about their families and the people of the villageas possible. Since it’s an administrative detention, subject to military law, they cannot have legal assistance and visits by their relatives. The innocent kids and teenagers arrested are subjected to traumatic experiences, carrying out a strong and preventive repressive action.