It was a somber trip through the villages of Urif, Einabus, and Huwara yesterday. Their peripheries continue to be threatened by the illegal settlement of Yitzar, which sits strategically on a hill above them, allowing for fast and terrifying raids on the Palestinians’ homes and cash crops below. 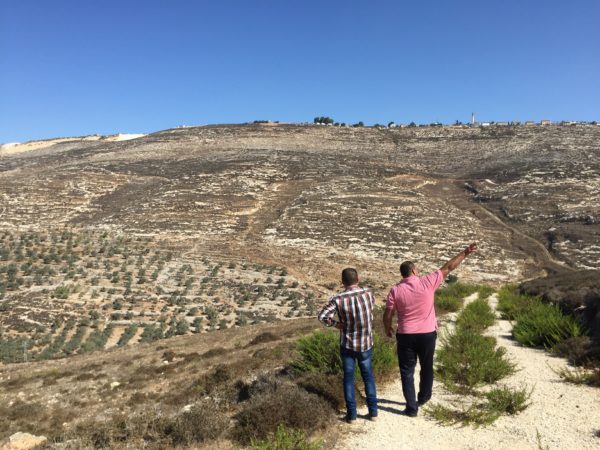 In Urif we met the mayor, who walked us by the village school and within view of the illegal settlement houses perched above a hillside rich with olives. Finally, he took us to see a man named Munir al-Nuri, the subject of a tragic story about an April day that would change his life forever. It surely began like any other – with the handful of chores that keep his house up and running. On this day however, heavily armed settlers – in the company of Israeli soldiers, no less – would march into his village, enter his home, beat him, break his legs, terrorize his family in the process, destroy the family car, and as a final measure, slice his foot open with a knife, robbing him of any hope of working his land for the next year, possibly longer. Needless to say, the soldiers did nothing to protect Munir, discourage the settler from carrying out more attacks like it in the future, or provide justice or reparations to Munir’s family. It was a gut punch for us listening, and frankly we didn’t know whether to cry or scream at the injustice of it all. 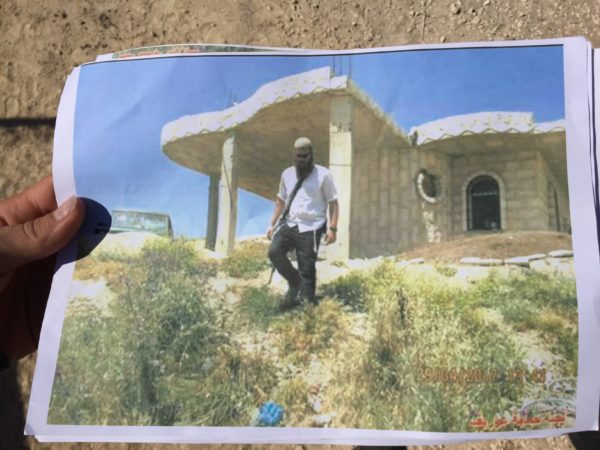 Munir al-Nuri keeps printed photos of the extremist settler who attacked him in his home.

In Einabus, we sat in the office of a local council member, who again walked us through the terrors of the same settlers in his village. He began with the chemical poisoning of the Palestinians’ olive trees – a break from the settlers’ more commonly used tactic of simply burning them. Finally, he came to the story of a shepherd who encountered an invading settler out in the fields. The settler, heavily armed and primed for violence, stripped him of his clothes and sent him naked back to his village – an obvious form of cultural and psychological warfare in a modest society, and even further, one that conjures up remembrances of Abu Ghraib. The man had a heart attack and died a week after the event.

As we sat in his office, I felt a similar thought passing through all of us: ”How could I possibly convey the gravity of what I was hearing to people – particularly Zionists – back home?”. With the hill perfectly framed by the window behind him, the stories carried a certain resonance.

Short of people sitting there with us, however, and looking at the hillside, where you’re actually able to picture the death squads walking down the hill into the villages, I remain unconvinced that it will translate. But perhaps a start, for those who don’t understand just what the illegal settlements mean for Palestinians, or who yet don’t care, would be to emphasize that the buildings themselves are not the source of such primal terror felt by the villagers. It’s the settlers – barbarically violent and insulated from recourse – that constitute the more immediate danger.

While the land itself is pregnant with meaning, as is the Palestinian memory it summons, the truth of these settlements is that no matter how inanimate they may seem, they’re ultimately tantamount to neatly paved, artfully constructed gore. When Netanyahu, Danny Danon, and the like talk about “strengthening the settlements”, what they’re really advocating for is bloodshed. Not hyperbolically, and not anything less. Brick by brick, Palestinians are attacked, they’re murdered, their farms and olive trees and their livelihoods set on fire. Next year their kids will grow weaker with hunger, life savings will be tapped into just to make ends meet, and the flame of bright futures will be extinguished in an instant. And all of this will happen because of mere buildings, for the settlers are the settlements – terrorizing, functionally above the law, and quite literally a threat to Palestinian survival. 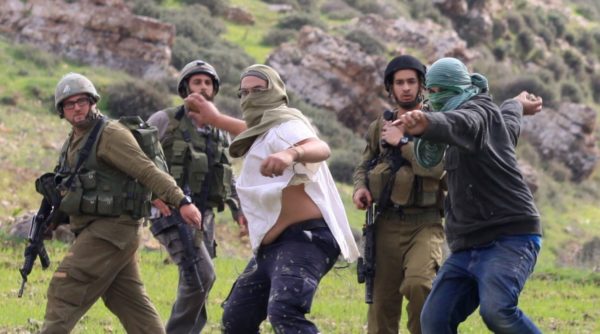