Last Friday, 18th of August, during a protest in front of checkpoint 56 in Hebron, a group of young Palestinians were demonstrating against the illegal occupation of Palestine. 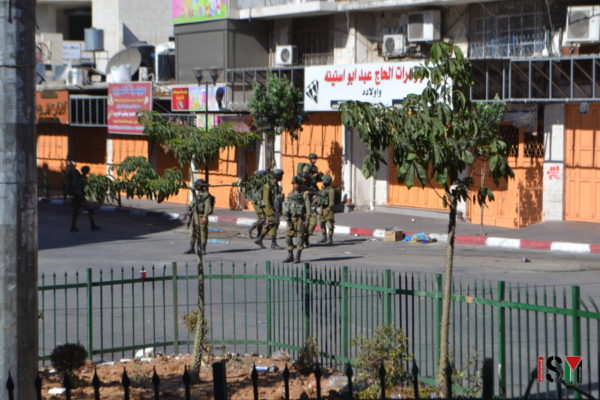 The Israeli forces violently dispersed the crowd, by illegally entering the H1 area in Hebron (al-Khalil). At least 30 soldiers went out of the checkpoint into the H1 area. The division of Hebron was established in the Hebron Agreement, and divided Hebron into two areas; H1, supposedly under full control of the Palestinian authority, and H2, under Israeli authority.

Around 3 PM the Israeli soldiers exited the checkpoint and entered H1, where they suppressed the protesters by throwing stun grenades and illegally started patrolling the H1 area while using private Palestinian properties for surveillance. During this time, the checkpoint was closed off, which severely affected the mobility of the Palestinians in the area.

The checkpoint 56 is a hotspot for frequent demonstrations, where the Israeli forces uses stun grenades, teargas, rubber coated steel bullets and live ammunition against the protesters.