Israeli forces at Shuhada checkpoint in occupied al-Khalil (Hebron) have put up yet another sign ‘instructing’ the Palestinian residents on their behavior at the checkpoint. The bright-red sign clearly with pictures prohibits any kind of supposedly ‘dangerous’ materials like guns, knives and scissors. Just like when you attempt to cross security in any airport. Whereas those objects have long been prohibited and most Palestinians wouldn’t dare bring any of those to any checkpoint, as they’d have to fear for their lives, the signs also illustrate something else: live for the Palestinians living in this area is immensely restricted.

At an airport, most people can at least attempt to grasp why those objects aren’t allowed. But now consider this checkpoint is on your daily way to your house. Your own home. Not an airport, you have to cross this checkpoint all the time. That’s what it is like for Palestinians living in the Israeli forces declared ‘closed military zone’ in Tel Rumeida and on Shuhada Street. Those restrictions, newly illustrated with little images, restrict daily tasks such as cooking and studying, doing arts, and even such mundane things as cutting your nails. No Palestinian is allowed to bring any kind of knife, so unless you have a big stack of sharp knifes – you won’t be cutting neither your fruit, nor meat, nor vegetables. If you break a pair of scissors, your children will not be doing arts anymore, and no matter how often they ask for new one’s, the parents are prohibited to bring scissors, even non-sharp childrens-scissors, into this area. 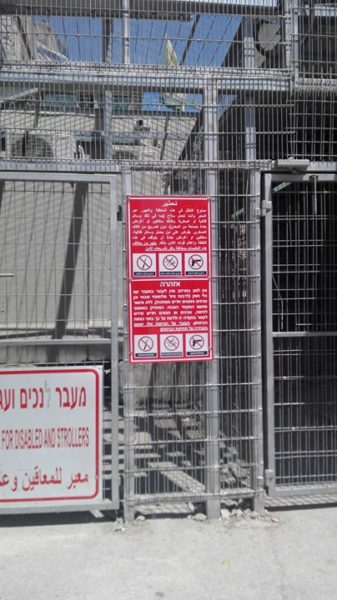 Doing so against the warning, you’d most likely pay with your life. A sentence on the sign says that a ‘permit’ can be applied for to bring any of the mentioned items. But even if that would be successful – assuming a Palestinian wouldn’t just be arrested for just applying for such a permit – or refused like so many Palestinians applying for building permits, it would cost a lot of bravery to actually show up at the checkpoint with any of those items. Bringing ‘banned items’ to the checkpoint, and then telling the heavily-armed soldier: “I’m bringing a knife”. It’s debatable whether that conversation would ever go beyond that point, or rather be cut short by gunshots from a heavily-armed occupation force.

In stark contrast to airports, where the measures are for security, in this context they are merely and deliberately solely for humiliation. In international law, a praxis like this is called ‘creating a coercive environment’ in order to facilitate ‘forced displacement’. And that’s what it is about: in an area that so conveniently connects all the illegal settlements within the city center of al-Khalil and on its outskirts, Palestinians are merely considered a nuisance. The attempts to drive them out are thus ever more enforced by the occupying army.