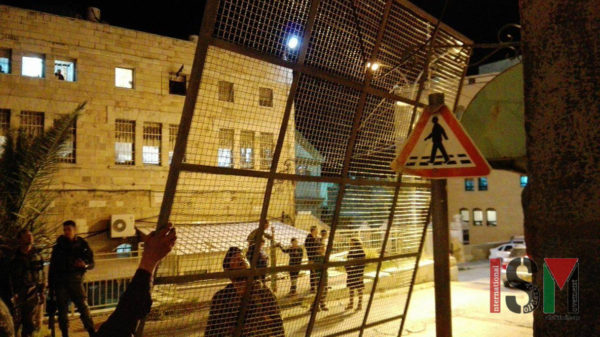 Palestinians were carrying the large metal pieces first to Shuhada checkpoint, where just a few days before, Israeli forces extended their perimeter of control further into the H1 neighborhood supposedly under full Palestinian control. With no Palestinian vehicles whatsoever allowed, Palestinians then had to carry the large pieces through the checkpoint, navigating the narrow doors and metal-cage like structure of the checkpoint. Afterwards, the fence-parts had to be carried down the street, and were first set aside on the sidewalk outside a building at the end of the tiny strip of Shuhada Street. Palestinians are still allowed to be on the end of this strip, whereas the rest of the street has been ethnically cleansed of any Palestinian presence.

As Palestinians attempted to pull up the large metal pieces onto the roof on the outside of the building, as they would not fit through the doorways, Israeli forces from the nearby checkpoint arrived to prevent them from doing so. The reasoning of the occupying soldiers was that the large pieces could fall on and thus injure or damage settlers walking on the streets or settler cars – not Palestinians on the same part of the street though. Israeli forces then refused to stop traffic, even for a short while, to allow the materials to be transported, instead forcing the Palestinians to put them back down. In the meantime, settlers gathered on the streets, watching the soldiers prevent Palestinians from lifting the materials up, and later on bringing pizza for the dozen soldiers that had arrived on the scene. After some negotiating, Israeli forces finally conceded to allow Palestinians to carry the materials up the stairs adjacent to the house – which are usually forbidden for Palestinians, not for settlers though. 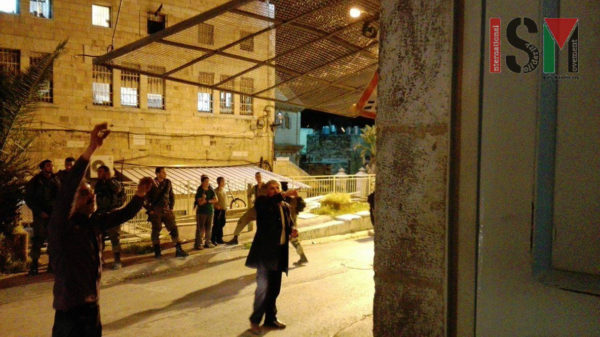 While the materials were carried up the stairs, settler children started playing with full bottles of carbonated drinks in the middle of the street, throwing them up in the air and running away before they would return and hit them. One boy jumped in front of a settler mini-bus, attempting to put the full bottle underneath the wheel of the bus in order to see it explode. The soldiers still present at the spot clearly did not consider any of these activities dangerous to the settlers, and did not even intervene when a settler boy deliberately sprayed the drink on the stairs in order to make it slippery for the Palestinians transporting the materials. 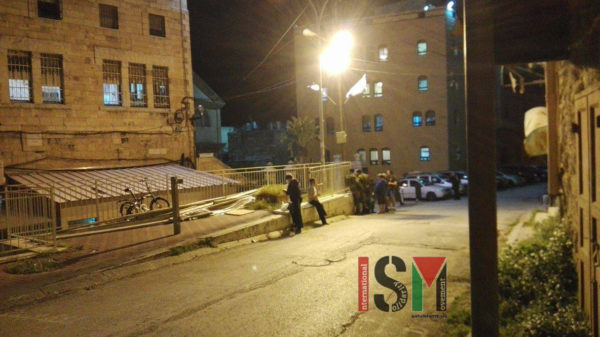 The large fencing was meant to reinforce a fence at Shuhada Street kindergarten which settlers had previously cut, damaging property inside the kindergarten and on a Palestinian family’s roof. When the last piece was carried up, soldiers entered the kindergarten to prohibit the installation of the fence, claiming that the Palestinians would need a permit to do so, further delaying this protective measure.

The same kind of fencing is installed around many windows and open courtyards of Palestinian family homes, as well as other entrances vulnerable to settler attacks.  This fencing is one of the only possible means of protection in a hostile environment that allows total impunity for settler abuses, under the full protection of the Israeli occupation forces.