Colonial settlers from the illegal settlements in occupied al-Khalil (Hebron) have repeatedly invaded and damaged a Palestinian kindergarten located on Shuhada Street over the last two days.

The following day, on Sunday afternoon, settlers again entered the kindergarten, but were surprised by the presence of Palestinians on their roof. Settlers then threw stones at the Palestinian youths before leaving. They cut a hole in the fence which protects the kindergarten entrance from illegal settlers entering. The settlers had clearly planned in advance to cut the fence as they had  brought the necessary tools with them. 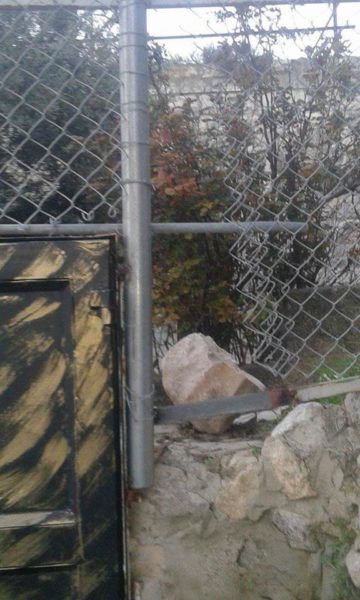 Settlers from the illegal settlements, under the protection of the Israeli forces, enjoy almost complete impunity for their actions, while Palestinians under the Israeli military law are presumed guilty until they can prove otherwise. The Palestinians living in the H2-area under full Israeli military control have no institution they can turn to for protection or help in this case, but are at the full mercy of the Israeli forces and settlers. With settlers having entered the compound for two days in a row, and the water tanks on the roof easily accessible, the families now do not only have to fear even more for their safety in their own homes, but also about being poisoned through their drinking water supply. In the past settlers in the Tel Rumeida neighbourhood poisoned the water tank of a Palestinian family.  Fortunately the poisoning was detected before anyone drank the water.