On Saturday night, Israeli forces expanded a road-closure near Shuhada checkpoint in occupied al-Khalil (Hebron), moving it further into the H1 area – that which is officially under full Palestinian control. 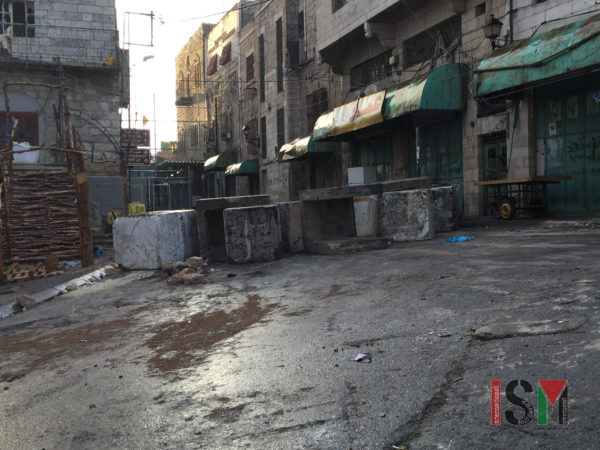 After midnight on Saturday, 1st April 2017, Israeli forces began moving the large cement roadblocks further away from the checkpoint, thus creating an even larger space between the first roadblocks and the actual checkpoint. The large concrete blocks now stretch the width of the street leaving pedestrians only two narrow entrances along each side.

Shuhada checkpoint leads onto Shuhada Street, where Palestinian vehicles, including ambulances, are entirely forbidden, and Palestinians are only allowed if they are registered and numbered residents of the area. This new closure especially affects any Palestinian with difficulties walking or carrying heavy items, as they are now further impeded from reaching the checkpoint, a crossing that is already incredibly difficult to gain entrance through, even if you’re a registered Palestinian who lives on the other side.