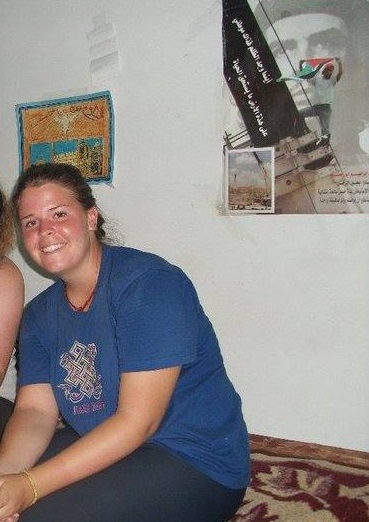 Kayla, sitting under a poster of Ashraf Abu Rahma from Bil’in.

Two years ago, on February 10, 2015, it was confirmed by her family, that former ISMer Kayla Mueller had been killed in Syria, while being held captive by Da’esh (ISIS). Today therefore, ISM honors her memory.

Kayla Mueller, originally from Prescott, Arizona, volunteered with the International Solidarity Movement in Palestine from August 2010 till September 2010. “Kayla came to Palestine to stand in solidarity with us” says Abdullah Abu Rahma, coordinator of the popular committee in the village of Bil’in. “She marched with us and faced the military that occupies our land side by side with us”.

As an ISMer, Kayla supported the Palestinian people in nonviolently resisting the confiscation and demolition of Palestinian houses and lands; she stayed with the Al Kurd family in Sheikh Jarrah to prevent Israeli illegal settlers from taking over their home; she participated in weekly demonstrations against the consequences of the apartheid wall, and she accompanied school children on their way to school in the neighborhood of Tel Ruimeda in Al-Khalil (Hebron), where children are often exposed to attacks by Israeli Forces.

I could tell a few stories about sleeping in front of half demolished buildings waiting for the one night when the bulldozers come to finish them off; fearing sleep because you don’t know what could wake you. … I could tell a few stories about walking children home from school because settlers next door are keen to throw stones, threaten and curse at them. Seeing the honest fear in young boys eyes when heavily armed settlers arise from the outpost; pure fear, frozen from further steps, lip trembling.” Excerpt from a post written by Kayla on October 29, 2010.

Three years later, on the 4th of August 2013, Kayla Mueller was abducted by the terrorist group Da’esh in Aleppo, Syria, where she was helping Syrian refugees escape the horrors of their country. According to fellow western hostages sharing a cell with Mueller in Syria, she had told them that on the day before her abduction, she had helped a friend – a Doctors Without Border contractor – install satellite internet at one of the Doctors Without Border hospitals in Aleppo. After having spent the night at the facility, she and two staff members had been abducted on the next day from a Doctors Without Borders vehicle.

Unfortunately though, Doctors without Borders refused to take responsibility for Kayla, and ransom negotiations where therefore ignored by the organization until their other staff members had been released.

Kayla therefore, was a captive of Da’esh for 18 month, during which she was exposed to severe torture and abuse by Da’esh members. On her final days, she was held as a sex slave by the oil and gas emir for ISIS, Abu Sayyaf. And she is believed to have been killed in an alleged Jordanian airstrike targeting ISIS.

Our hearts are with Kayla, and all others who have lost their liberty, lives or loved ones in the global struggle for freedom and human rights for all.