“Tom was standing in between me and Laura. There were two girls playing behind the barrier, very frightened; they did not know how to speak. So Tom walked forward and led them back down the street. Then he returned. He saw a boy behind the barrier. I saw him too, Salim Barhum. I wonder if I could have helped him more… . Tom went towards the boy, about two to three meters forward. The boy was stunned, petrified. Tom went to carry him, bent towards him with his arms out. Then he fell as a bullet hit him, and blood and brains began to pour onto his chest.” 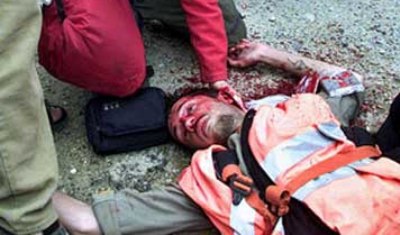 Hurndall was wearing a fluorescent vest so he would not be mistaken for a combatant. The official report, however, claims that the commander who killed Hurndall saw a man wearing camouflage and moving towards the soldiers while shooting: the soldier claimed that he simply returned fire. A formal investigation was not opened until months after Hurndall was shot, after immense pressure from Israeli Human Rights groups, the media, and Hurndall’s family.

The investigation was carried out by the Israeli military, while Hurndall was in a coma. It claimed that the causes of Hurndall’s injuries were uncertain. This investigation ignored the numerous eyewitness reports; it was based entirely on the testimony of the commander, who killed Hurndall, and a soldier who was in the area. The majority of the official investigation report focuses on Palestinian attacks and condemns ISM activity. The part of the report that actually describes the shooting, gives an incorrect location—claiming that Hurndall was closer to the military outpost.

The investigation was reopened after Hurndall’s death due to pressure from the British Foreign Office and the Hurndalls. The commander, Sgt. Taysir, was found guilty of manslaughter and admitted to lying about Hurndall having a weapon. He also explained that he was given orders to fire at unarmed people. Taysir was sentenced to only 8 years in prison for manslaughter and obstruction of justice. He was released from prison early—in 2010—for good behavior.

The pressure from foreign governments and Hurndall’s family forced the Israeli military to take some action and assume responsibility. But the short sentencing and early release cause one to question if this is really justice. When we remember Hurndall today, we should realize that the fight for justice and peace is not over. The Israeli forces continue to act irresponsibly and aggressively towards civilians. When Palestinians are killed, the Israeli forces are rarely pressured to investigate and convict those responsible.