On the evening of the 10th of October, a group of approximately 25 children playing outside the community center at the gate of Aida refugee camp, were suddenly, and without provocation, attacked by soldiers dressed in civilian clothing. Caught completely unawares and gripped by fear, the group scattered and began to flee down two streets leading to the camp, only to find both routes blocked by several more soldiers, also dressed in civilian clothing. Eyewitnesses describe boys being punched, kicked, and thrown violently to the ground and against the wall. At that very same moment, a large number of soldiers emerged from the army base (the only street not occupied by soldiers in civilian clothing), encircling the boys so that there was little chance of escape. A total of nine boys were arrested that evening.

There is no question that what happened at the gates of Aida camp that evening was a well-planned and coordinated sting operation, executed with a level of sophistication that one might conceivably associate with the apprehension of hardened criminals, but certainly not of a group of apathetic adolescents, minding their own business outside their own homes.

None of these boys had ever been previously arrested or charged with any crime of any sort, nor did they pose any real threat, and after this attack several of the boys were charged in the following days with minor offenses. For example, Mohammed Derwash (14) was charged with throwing a plastic container at a soldier; his cousin, Adam Derwash (16), for having marbles in his pocket with, “intent to throw”. Putting to one side the sheer absurdity of these charges, for which many of the boys are still being detained, it’s important to note that these charges are for offenses that are alleged to have occurred at the time of the boys’ arrest. Remember, from the boys’ perspective, they were being attacked by crazed civilians. Therefore, one might reasonably argue that these actions were taken in self-defense (if at all).

Following their arrest, the boys underwent a traumatic interrogation process.  13-year-old, Amir Mahmoud, was one of the nine arrested that day. His nose was broken when his assailant threw him against a wall, and punched him in the face. He was subsequently charged with “throwing an object with intent to harm” and “beating a soldier”.  His bail was posted at 6000 shekels, the equivalent to €1450 Euros, a sum that is veritably unobtainable for many of the impoverished residents of Aida refugee camp. He, and the other boys arrested that day, were bound, blindfolded, and taken to a military base where they were then violently beaten. He knew that other boys were around him because he could hear their cries. He showed us the cuts incurred from the handcuffs that still mar his wrists, a week later.  When he shared with a soldier that his handcuffs were too tight, the soldier proceeded to tighten them further. 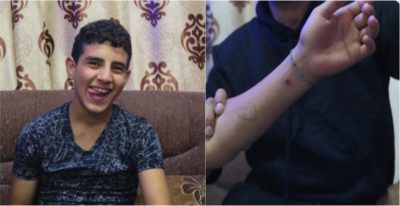 Amir was interrogated with no lawyer or family member present. His interrogation began with a gun being placed on the table, pointed ominously in Amir’s direction. However, the officer’s style of interrogation quickly changed from subtle gestures to outright verbal assault, as he grew increasingly frustrated with Amir’s unwillingness to engage in questioning, or incriminate any of his friends. The officer then resorted to beat Amir, when he finally tired of the boys’ silence.

The interrogation for 13-year-old Dawud Sharaa began at 2 am in the morning on the eve of his arrest. The four hours previous he spent in the cold, blindfolded, handcuffed, threatened and beaten, told to wet himself if the urge to go to the toilet became too great. His interrogation lasted for approximately one hour. It began with him being told to call his father, that he was to be released. His father, heartened by this news, asked to speak to a soldier to confirm. The soldier yelled at the boy to shut up, and hung up the phone. 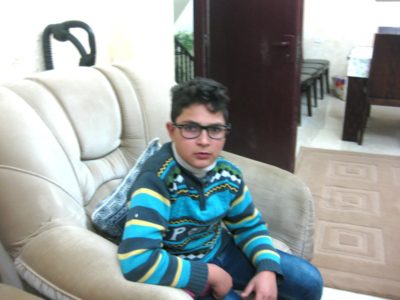 The psychological torment did not finish there for Dawud. The soldiers then proceeded to engage Dawud in a mentally exhausting cross-examination where he was verbally assaulted, spat at, threatened with violence, and even physically beaten in order to provide them with information, or admit guilt to acts he did not commit. His father produced for us a medical certificate in which the boys physician documented the bruising he had suffered as a result of the beating he received. 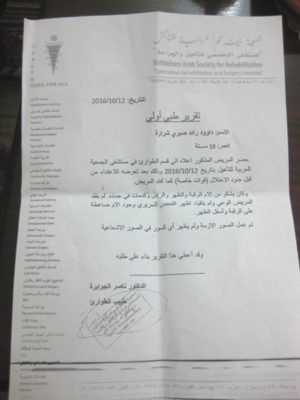 Medical certificate documenting pain in the head, neck and lower back and bruises on his body.

For the remainder of that night, from approximately 3am until he left for his court case at 7 am the following morning, he spent in a cell, above which a water tank was situated so that cold water dripped down upon him with harrowing regularity. Even times when an exhausted Dawud began to drift off to sleep, the patrolling soldier smacked him in the back of the head with the but-end of his M16 riffle.

Both these cases provide telling insight into on the larger agenda being forwarded by Israeli State Forces against Palestinian youths. During my time at the camp I met with some of the boys who had been arrested that day and who had since been released, but also with several others who had been targeted in separate incidents, as well as their families, and a number of community leaders and volunteers. What became abundantly clear during my time there was that this was not an isolated incident.  Palestinian youths, aged between 12 and 16 years old, are now the primary target of Israeli state aggression throughout the West Bank

Only last week 14-year-old Ahmad Manasra was sentenced to 12 years in prison. He was alleged to have been complicit in a stabbing incident involving an Israeli settler. The video of his interrogation and confession, which was leaked on the Internet and can be found here, is telling of the type of treatment these boys receive at the hands of Israeli Security Forces. Ahmad was 13 when he was arrested. The date of his trial was put off until he was 14, after which age he could be given a prison sentence under Israeli military law. Sentencing of Palestinian youths under Israeli military law has become an important tool of the Israeli apartheid regimen. Interestingly, both Amir and Dawud’s trials have similarly been postponed until the boys turn 14.

Almost unbelievably, the day we went to interview Dawud, he had been arrested again, this time from his home at 6am. The soldiers had a photograph of a boy wearing a white shirt, apparently resembling Dawud, throwing a stone, and so they raided his house in search of the white shirt. They found nothing. It was not Dawud in the picture. But state forces are willing to adopt unscrupulous measures to attempt to incriminate this young boy.

So why are young boys increasingly being targeted by the occupation?  I posed this question to the father of 14-year-old Motaz Ibrahim Msalm.  Motaz, in a separate incident, had his house raided in the middle of the night on the 5/10/16. He was pulled from his bed, thrown against the wall, arrested and detained for 5 days. As justification for his arrest the Israeli state forces declared that he posed a “security risk”. He was interrogated similarly to the cases described above. 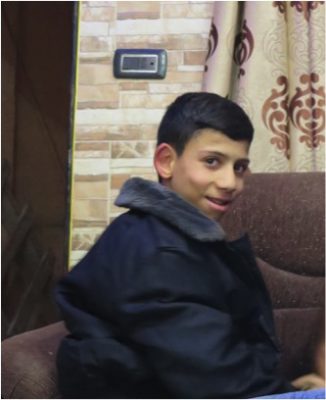 “To get information”, proclaimed another. “To use fear and torture to get the boys to give up information and then use that information against them and others, so as to incriminate and lock up as many of them as they can.”

“We are also afraid of foreigners now”, Amir interjected. “The soldiers who attacked us wore civilian clothing. So now we are suspicious of everyone that comes into the camp”.

There is no hiding from the fact that these boys were tortured by Israeli state forces. Describing the psychological scars left behind, one father told us that his son wakes up at night screaming with fear, that he wets the bed and panics at even the slightest of disturbances. That he has become withdrawn, no longer leaves the house and has become prone to aggressive outbursts against his mother and siblings. I couldn’t help but  notice this fathers eyes well up as he detailed for us how profoundly his son has been affected by the torture he endured.

That this can happen to anyone, anywhere, in the twenty first century is hugely upsetting. That this can happen to a collective of innocent teenagers, playing outside their homes or snatched from their beds, kidnapped and held at ransom by the state, is even more troubling. But that this is a policy now systematically practiced by a nation that is held to such high esteem by the international community, a nation that publicly presents an image of itself as a “free” and “open” society. That, to me, is truly terrifying.

The question I am left with is how? How have we, the international community, allowed ourselves to be deceived in this way, charmed by Israeli rhetoric yet oblivious to their wicked intent? For how long will we allow it to continue? When will you say… ok, this has gone too far! Enough is enough! If the on-going ethnic cleansing, annexation of land and demolition of homes wasn’t enough to make you speak up, what of child torture and imprisonment? Will you speak out against that? Or will this too go unchallenged by the international community, as has every atrocity that has preceded it?

The truth is its up to you! So the real question is, where do you draw the line?