New
Home / Hebron / Shop owner in Hebron got both his front-windows smashed by celebrating settlers.

Shop owner in Hebron got both his front-windows smashed by celebrating settlers.

This week-end in al-Khalil brought thousands of extremist Jews and settlers from all over Israel and abroad to celebrate the week’s Torah study on Chayei Sara  (Live of Sarah), where Abraham purchases the cave of Machpelah (of which they think is in al-Khalil) in order to bury his wife Sarah.  On Friday evening, a group of settlers coming from the illegal settlement Kyriat Arba attacked one of the two remaining Palestinian shops on their way to the Ibrahim Mosque in Hebron, which partly serves as their synagogue since the settler terror attack on February 25 1994. (http://www.aljazeera.com/news/2016/02/remembering-ibrahimi-mosque-massacre-160225061709582.html).  The present Israeli soldiers did not prevent them from committing this crime.

After threatening the shop owner and his customers, and smashing both shop-front windows, they continued on their way to the religious festival, loudly shouting and singing.  Although some Israeli forces along the street clearly witnessed this criminal incident, they let the settler-group go unhindered, leaving the traumatized shop-owner with the damage and the costs.

Attacking shops isn’t a rarity for colonial settlers. It’s an inevitable consequence of Israel’s policy.  By creating illegal colonies in occupied Palestine,  promoting and benefiting settlers to illegally move there, providing them with arms and training, and due to the lack of a honest legal system, the Israeli state is undoubtedly responsible for the crimes committed by its colonial settlers.

Instead of taking care for the safety of the Palestinians, which is their duty according to international law, the Israeli army is only concerned for the safety of the settlers and the visiting Zionists from Israel, US, Europe and other nations, who illegally roam the streets of occupied Hebron. For that reason, extra troops arrived and occupied some rooftops of Palestinian family houses. 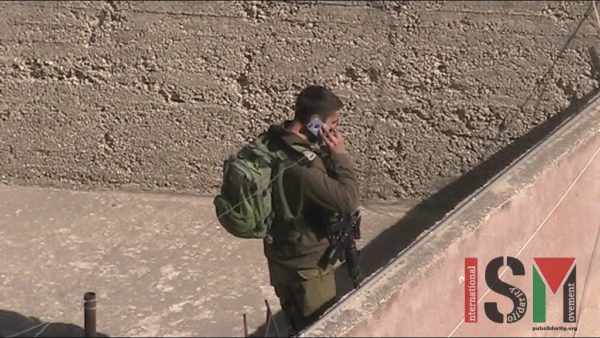 A  Palestine family told us that at 2 o’clock in the night, all of them were forced out of their home on the street, where they stood for at least an hour in the nightly cold. until the Israeli forces finally allowed them to enter their home again.

The rooftop remained occupied for approximate 24 hour, the soldiers told us. They locked the front door, refusing anyone else than the family to enter, and kept on using the families kitchen and toilet, threatening them with their automatic guns.

“Today, its my home”, one of the soldiers told us.