New
Home / Features / Children: marvelous examples that life must go on whatever happens

Children: marvelous examples that life must go on whatever happens

Children: marvelous examples that life must go on whatever happens, even if their growing up is influenced by negative experiences with settlers, soldiers, torture, humiliations…

We experienced this in the two days of the Jewish festival of “Chaye Sara” in occupied al-Khalil (Hebron) in which 2.500 settlers arrived, camped in tents, went on their tours along the Palestinian souq and all the streets around the Ibrahimi Mosque. Apparently they prayed, but… what did they ask to their God?

Palestinians and internationals were expecting the usual violence against people and shops. In fact, groups of youngsters, feeling protected by their army, destroyed a shop window, insulted shop owners, made exercises with their third finger… violently stole  handcraft souvenirs from many shops. To steel is a crime…. But here in Palestine, it depends on who you are.

Some of the settlers in their tour, just in front of a soldier, threw stones at  houses on the hill over the Ibrahimi Mosque. So we spent two nights in the area, trying to reduce more violence:  soldiers and settlers could see us and ours cameras…

As usual, the families were very welcoming, never complaining… they knew… this is their life. And the children? After  the first moments, the explosion of their innocence, of their hunger of attention, thirst of joy. 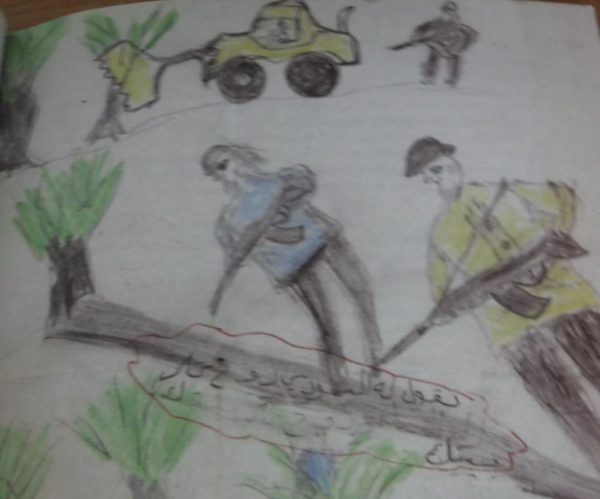 drawing made by Palestinian child

In front of the houses, soldiers equipped and ready for the most  terrible fight, the rifles pointing to a possible enemy  and hundreds of Jewish settlers walking proud to demonstrate their presence there.

And the children? They went on playing with us, laughing, jokeing, even when we accompanied them to a shop.

The rifles and the most sophisticated guns against the incredible strength of these children able to smile and play with the simplest things in their streets, in their homes, thanks to their minds still free of a gray and oppressive wall.

The right to be a child – also in this situation of human stupidity and of too many adults against them. The international society has the duty to protect them. Too many of them have already had their lifes ruined. It’s enough!!!