The 28th of August 2016, a new school year in occupied Palestine has started after a 3-month summer holiday. In the occupied West Bank city of al-Khalil (Hebron), Palestinian children living in the H2-area, under full Israeli military control, are posed with a maze of checkpoints they have to navigate through back and forth from school.

In the area near the Ibrahimi mosque, a cluster of schools is located past the newly-‘renovated’ Salaymeh and Queitun checkpoints. In the Tel Rumeida neighborhood, that was formerly a closed military zone for several months, in addition to the checkpoints there’s a staircase closed by the Israeli forces and the ever-present threat of attacks, carried out by settlers from the nearby illegal settlements. These three checkpoints share the new layout of highly militarized and fenced off checkpoints. Usually only one person at a time is allowed to access the ‘box’ where ID-checks, bag-searches, questioning and humiliation takes place. Any other person trying to pass the checkpoint in the meantime is forced to wait behind a locked turnstile, that Israeli forces arbitrarily decide to keep locked to make people wait for an unknown amount of time. 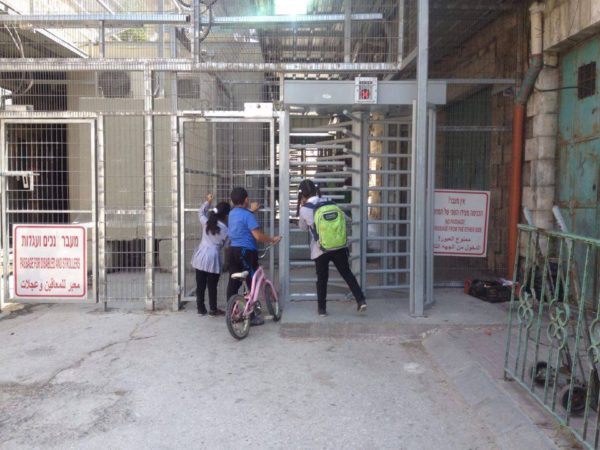 Around the Salaymeh and Queitun checkpoints, students, teachers and residents of the area additionally face tear gas that Israeli forces shoot from their comfort-zones at the checkpoints, often straight towards the schools. This form of collective punishment affects not only all the schools, but the whole neighborhood, when tear gas clouds linger in the streets. On Monday afternoon, when kids made their way home from school through Salaymeh checkpoint, Israeli forces shot a total of 10 tear gas canisters towards a group of boys throwing pebbles at the highly militarized and barricaded checkpoint, leaving many students choking from the supposedly ‘less-lethal’ gas. Wednesday morning, at Queitun checkpoint, 4 tear gas canisters were fired by the Israeli forces, at least one of which was directed horizontally at the children – in direct contradiction to instructions to shoot the ‘less-lethal’ gas in an arch over the head of persons in order to avoid serious injury and death of persons. Shooting in a straight line at the children, Israeli forces deliberately risk to hit a child with these extremely fast and thus dangerous canisters, that already have caused serious injuries and death of Palestinians in occupied Palestine. 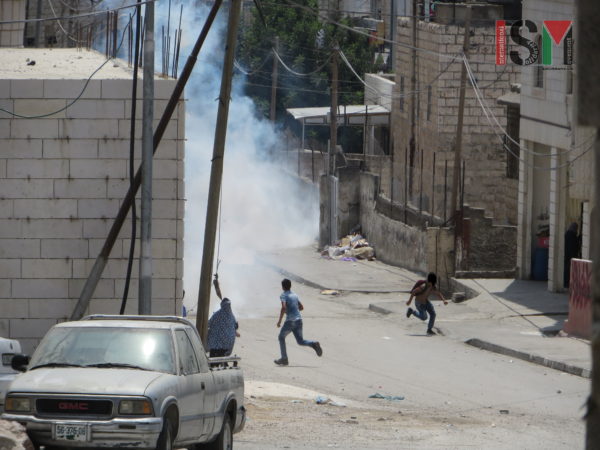 On Thursday, Israeli forces locked the Ibrahimi Mosque checkpoint, entirely denying students and teachers passing in any direction access to their schools, without prior notice.

This is only the first week of school for children in Palestine, but Israeli forces are already using their routine harassment, intimidation and possibly deadly violence against children resisting this illegal and vicious occupation by the simple fact that despite the increasing efforts of the Israeli forces to make them disappear, they strive to achieve a good education.