A group of Israeli soldiers went into the Palestinian market on the search for the children they claimed were throwing stones, stopping any child they encountered on their way, that more or less fit the age-group of around 10-14 years old. They stopped and questioned a 12-year old boy at Bab al-Baladiyya, one of the entrance and exit-points for the soldiers to enter from the illegal settlements located on Shuhada Street into the Palestinian market. Without any family or a lawyer present, the soldiers questioned the boy, first claiming that he was throwing stones and threatening to arrest him and take him to the police station. Only because of the intervention of a local, the boy wasn’t kidnapped by the Israeli forces, that eventually admitted that the video-evidence they have is not even showing him. Still, they claimed that he was there and thus were attempting to force him into giving information.

After they finally allowed the boy to leave, they arbitrarily stopped any child that fit their age group to question them about their whereabouts and where they were going, even entering a Palestinian shop to interrogate a child. After about half an hour, they gave up their search, but approached human rights observers to ‘justify’ their behaviour, showing them a video on a phone that showed a boy throwing small stones,  at a securely fenced military tower, without any possibility of the pebbles even hurting anyone. Despite only one boy throwing these small stones, Israeli forces were out looking for all the three children in the video. Israeli forces ‘justified’ their search for the children to the human rights observers, stating that because of what can be seen in the video, they went out to look for ‘a boy in a white T-Shirt’ – despite the boy in the video clearly wearing a green T-Shirt. In spite of both these facts, they stopped and interrogated any child loosely fitting the age-group of around 10-14. 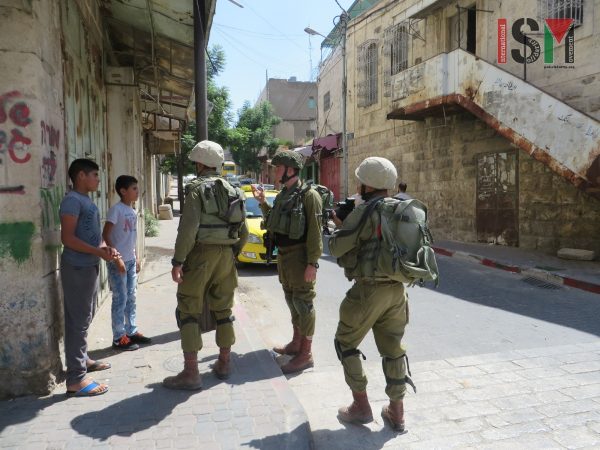 Israeli forces cornering children in the street for interrogation

In the evening, Israeli forces again entered the market, to stopp, harass and question children fitting this age-group, and another arrest of an arbitrarily picked child could only be prevented by the intervention of a local.

The fact that the arrest of any children under the age of 12 is ilegall even under Israeli military law that applies to all Palestinians in the West Bank, did not bother the Israeli forces. Despite the boy in the video clearly less than 12 years old, they went out to hunt down children that are below the legal age for arrest even under the apartheid military law, the orders in clear violation of not only international law, but even the racist and apartheid Israeli military law.