During nighttime on the 1st of May, Israeli Forces raided the village of Ni’lin in the West Bank in occupied Palestine without any reason.
First, with the arrival of one military jeep, villagers were already aguishly awaiting why the Israeli army is invading the village, fearing arrests. Later on, several armored military jeeps invaded the village and immediately started shooting tear gas towards the houses in an act of collective punishment, targeting civilians that were mainly still asleep. Additionally, the Israeli forces fired rubber coated steel bullets and live ammunition towards the house. Ni’lin in the last weeks has repeatedly seen army attacks on civilians entirely uninvolved even in the weekly Friday demonstrations. 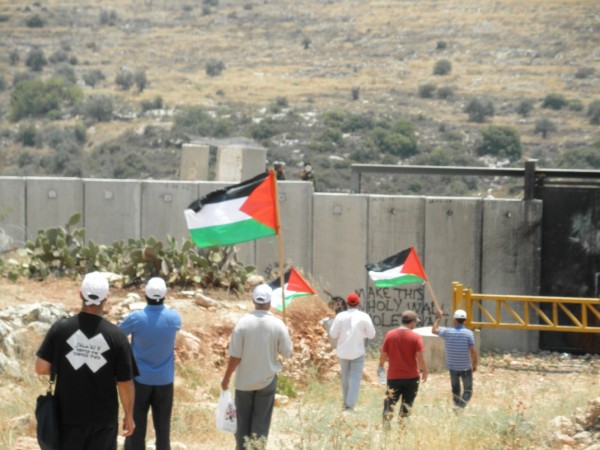 This night, a 17-year old young man was shot in the head with a rubber coated steel bullet, but luckily did not sustain any major injuries. Additionally, a newborn, only 7 days old baby, had to be taken to hospital for tear gas inhalation. This is a result of the Israeli forces tactic of deliberately targeting civilians and all the villagers in acts of collective punishment. In the recent weeks, several children and elderly had to be treated for excessive tear gas inhalation as Israeli Forces targeted a public park with a playground, showering it in tear gas; and shooting the potentially deadly long-range tear gas canisters straight into the village. As this long-range tear gas canister can not be heard and has an extremely hard metal tip, it is not only potenitally deadly – an international solidarity activist Tristan Anderson was critically injured with this kind of tear gas canister in the head in 2009 in Ni’lin and now requires 24-hour care – but it also easily breaks through windows and even walls. This is just another proof of how dangerous it is. Thus, tear gas can easily, and has already, trapped civilians inside their own homes, causing excessive tear gas inhalation.

During the last weekly Friday demonstration in Ni’lin against the illegal Israeli apartheid wall and the theft of the majority of the villages agricultural lands (the majority still located and theoretically accessible on the villages’ side of the wall has arbitrarily been declared a ‘closed military zone’ thus denying the villagers access), Israeli forces, surprisingly did not use the violence against the peaceful protestors, the villagers were forced to get used to.

The nightly raid on Monday, thus, appears to the villagers to be an even more twisted act of revenge by the Israeli forces.

See the video from the invasion here: