New
Home / Features / Interview with the wife of the Palestinian prisoner Mohamed Najeeb Nazal, recently kidnaped in an Arab country and handed to Israel

Interview with the wife of the Palestinian prisoner Mohamed Najeeb Nazal, recently kidnaped in an Arab country and handed to Israel

Mohamed, 33 years old, is originaly from Qabatia, a Palestinian city located near Jenin, in the occupied West Bank. He lived there until he left Palestine in 2007, after the murder of his brother at the hands of the Israeli occupation and the death of his mother shortly after.

He then moved to Egypt to study and work and stayed there until 2015. In that year he moved to work for his uncle to another Arab country [Mohamed’s lawyer advised his wife to stop mentioning the name of this country or the zionist regime would aggravate his sentence as punishment]. “While he was in that country we got engaged and started the procedures to bring him to France, where I am living. Unfortunately we failed to get him a visa at that moment”. 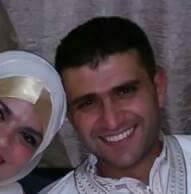 Mohammed and his wife

After trying in vain to bring her fiancé to France she finally travelled to that Arab country and got married there. A few weeks later they were planning to travel together to France, but due to her work she had to postpone her trip a few days, and that was the beginning of their nightmare. “His family called me and told me that some security forces from that country entered his uncle’s home while they were having dinner and kidnapped Mohamed”. “For three days no one knew anything about him… finally we were told that he was under police arrest and would be released soon.”

But things were just going to get worse, till “finally on the 26th of January we were informed that he was under interrogation in Ashkelon, south Israel, where he stayed for four days before he was taken to Majedo jail. “Now we are waiting for the trial, where he will be judged under false accusations. Meanwhile I’m in France suffering alone, while five months pregnant… We don’t understand anything, he has never been involved in any political faction or participated in any political activity, neither in Palestine nor outside Palestine.” “I have gone to many human rights associations, but no one cares about us…”