This Friday 15th April, the village of Bi’lin held their long-running protest against the illegal Israeli occupation and Apartheid wall. However, the protest on this day was tinged with further sadness, falling as it did on the seven-year anniversary of the death of Bassem Abu Rahma, who was hit directly in the chest by a long-range tear gas canister in April, 2009. 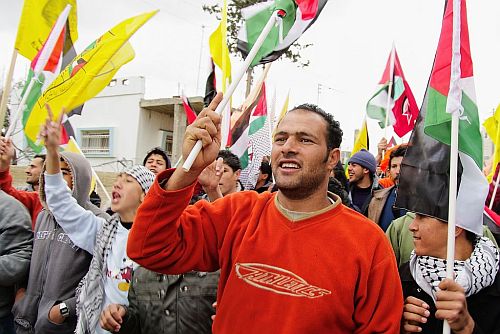 Bassem on a Protest

Abu Rahma’s death was immortalised in Emad Burnat and Guy Davidi’s film Five Broken Cameras. Footage used in the film proved that Abu Rahma was standing east of the fence, not engaging in violent demonstration (stone-throwing) and not endangering soldiers’ lives. Analysis of the documentation by imaging experts found that the gas canister that killed him was aimed directly at him, contrary to the rules of engagement as laid out by the Geneva Convention. It also clearly contradicts the instructions for the use of tear gas as a ‘less lethal’ weapon, which clearly states that it always has to be shot in an arch above protestors and never straight at them.

Seven years after his death, Subhiya Abu Rahma, Bassam’s mother, still does not have justice for her son’s murder. At this Friday’s demonstration, Palestinian, Israeli and international activists marched peacefully towards the Apartheid Wall holding pictures of Bassem, waving Palestinian flags and chanting songs. They were met and pushed back with a large volley of tear gas, rubber-coated steel bullets and stun grenades. Dozens of people suffered the effects of the gas, with two children – who were in their house and not attending the protest, and thus uninvolved civilians, treated for serious inhalation. Once again the Israeli occupying forces used the deadly long range tear gas canisters in their attempt to end the demonstration. These canisters come with a potential range of 500 metres, are capable of piercing the walls of houses and are being aimed directly at protestors. 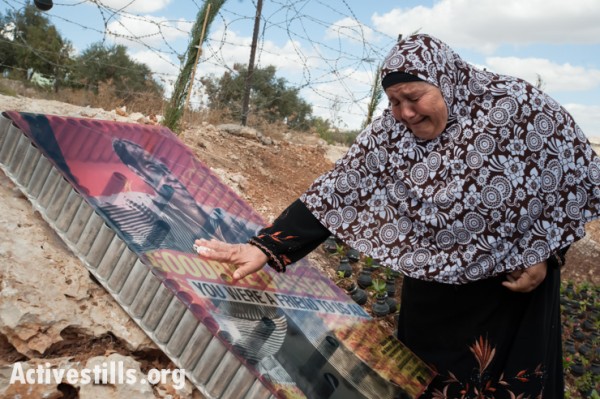 Sabiha, Bassem’s mother, weeps over a photograph of her son Photo credit: activestills

Bassem Abu Rahma posed no threat to the Israeli army the day he died and was a part of a peaceful protest against the illegal occupation of his land, much like the protest that still takes place every Friday in Bi’lin. If the army continue to respond with disproportionate and excessive violence, denying the Palestinian people (and those expressing solidarity) the right to peaceful protest, then it is only a matter of time before another life is lost in such tragic circumstances.