New
Home / Features / Apartheid in the fields: Part 3 How the food gets to us and what we can do

Apartheid in the fields: Part 3 How the food gets to us and what we can do

A new report from Corporate Watch outlines exactly how the food grown in the illegal settlements of Palestine gets to our plates in Britain. This final summary looks at what we in Britain can do to support the boycott called for by Palestinians.

Palestinian farmers and agricultural workers are asking us to boycott not only produce which we think was produced in the occupied territories, but to boycott all produce exported by Israeli export companies who benefit from economic conditions and exploitation in Gaza and the West Bank, particularly as ambiguous labeling can make it difficult to distinguish where exactly products originated. 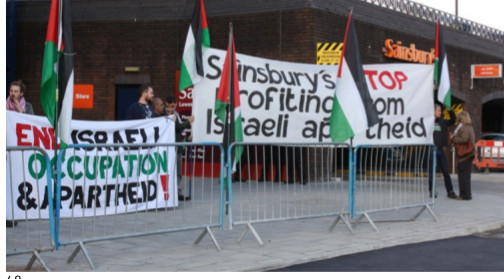 These companies include Arava, Mehadrin, Hadiklaim, Carmel Agrexco, and Edom and Valley Grown Salads. They export products such as peppers, tomatoes, onions, chillies, grapes, strawberries, avocadoes, figs, dates, aubergines, and herbs, and these foods end up at all the main supermarkets in the UK. They may be labelled as coming from Israel (wrongly, when produced in the occupied territories), Palestine, Jordan Valley, and even allegedly, Saudi Arabia.

In 2009, after intense pressure from campaigners, the UK’s Department for Environment, Food and Rural Affairs (DEFRA) issued new guidelines regarding the labelling of products being imported from the West Bank: ‘the Government considers that traders would be misleading consumers and would therefore almost certainly be committing an offence if they were to declare produce from the OPT, including from the West Bank, as “Produce of Israel”.’

What can you do in the UK?