Ali greets us international activists with a certain kind of warmth that those who are foreign to the middle east (or Palestine in this case) may have never experienced or have been accustomed to in our home countries. We have all learned very quickly to appreciate the culture that is being bestowed upon us and the welcoming nature of the Palestinian people; a nature which remained steadfast for more than a half century despite the ongoing, brutal occupation and despite what much of the media and certain governments from abroad would like you to think of the Palestinian people and the current situation they are facing. 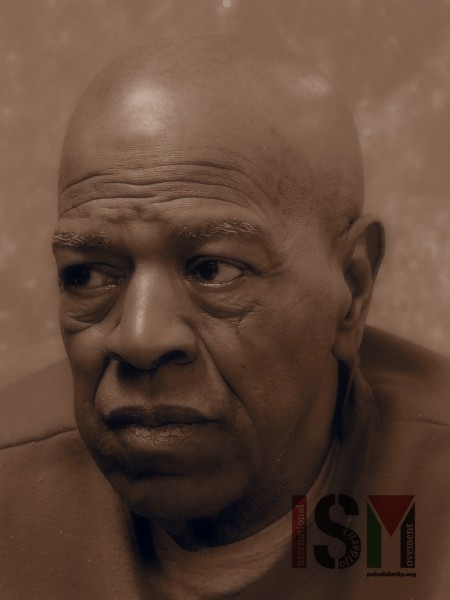 He prepares seating arrangements for us to the best of his ability in his tiny family home, asking everyone to take a seat whilst he sits himself on a single bed that has been prepared in the living room. The bed has been placed there to accommodate the extra people in his family, due to the evident lack of space they endure whilst living in the highly dense African quarter of Jerusalem.

You know from the moment he begins to speak that Ali has natural charisma, charm and a quick way of thinking that has been acquired through a lifetime of hardship and struggle. Turning his past situation into positive ideas and proposed solutions for the future of Palestine. He sheds real food for thought for those who care to know the real situation the Palestinian people of Jerusalem, and Palestine as a whole, continue to face.

Ali was only eighteen years old in 1967 when he and some friends tired of the situation, along with the racial oppression that he faced being an afro-Palestinian decided in an act of defiance to place a bomb at the entrance to Jaffa gate in Jerusalem. Nobody was killed, however nine Israeli soldiers were seriously wounded. Ali was soon found, arrested and tried for the crime that he had committed. His next seventeen years were to be spent in an Israeli jail, shaping and changing the way in which Ali would now live out the remainder of his life.

When released Ali started to run alternative tours throughout Jerusalem, bringing awareness to the situation that the people of Palestine and occupied Jerusalem face daily. However it’s a tour far different from the standardised religious journeys that the majority of internationals and passers by would participate in. In fact anyone fortunate enough to strike up conversation with Ali, who can be found near the entrance of Damascus gate, may just find themselves on one of the most worthwhile, informative and alternative tours in the old city.

Ali chain-smoked his cigarettes, pausing between inhalations, leaving long but comfortable silences as he pondered on what to tell us next,  leaving us internationals on the edge of our seats. As he exhaled, the smoke danced in front of his face through the thin ray of sunlight that cut through the dimly lit room and onto his face.

Ali spoke to us about the current situation the Palestinians in the Islamic quarter face and the “tightening of the noose” on Palestinian shopkeepers by the occupying forces. He sees the Islamic quarter being reduced to nothing in the near future due to strategic economic strangulation by the Zionist government, heightening taxes and limiting the flow of tourisms and locals within the area. He explained to us the continued harassment and occupation of homes by the illegal Israeli settlers in the area.

Ali looks at the ideas put forth from the political parties regarding the situation facing the Israel/Palestine conflict, the one state or two state proposals that he deems have passed their used by dates, “the new Palestine, if there is to be one must come from the roots up.” This was a perspective that, in no small part due to my experiences on the ground as well as the conversations about the dead-end nature of past attempts at top-down political reorganisation I have had with Palestinians, I found myself in absolute agreement with.

Ali has toured internationally throughout Europe, giving speeches in varying countries and has received recognition and admiration wherever he has spoken.

My take on the day: Ali is a unique character, he is  in no way what you would expect of a tour guide, he speaks from the heart (perhaps a little crudely at times!) and tells it how it is. He is extremely informative and brings about questions and points that no formal tour would dare speak of. All of which makes him and his talk captivating and extremely interesting in their own way. I would highly recommend him to anyone wanting to get to know the real Jerusalem.  If you’re interested you can find him near the entrance to Damascus gate drinking coffee on most days. Just look out for the ‘Denzel Washington’ character as he likes to call himself.