A night of protective presence needed

The two boys met us at the store, shouting the name of our Palestinian contact and waving us along. The cobbled stones in the alley made a nice contrast to the darkness of the night. My feet landed softly on the mud where we started our climb. Glimpses of trash were seen from the flickering flash lights, as if we were threading our way across the city dump. We were going to the house of Imad Abu Shamsiyyeh, the man who had managed to catch last week’s execution on film. His name was out in the media and he and his family had received death threats. The local illegal settlers had also put up posters with his name and face on them, saying they wanted him skinned alive. The house had already been firebombed.  We were going there as an international presence to act as a deterrent to what seemed a likely further attack. 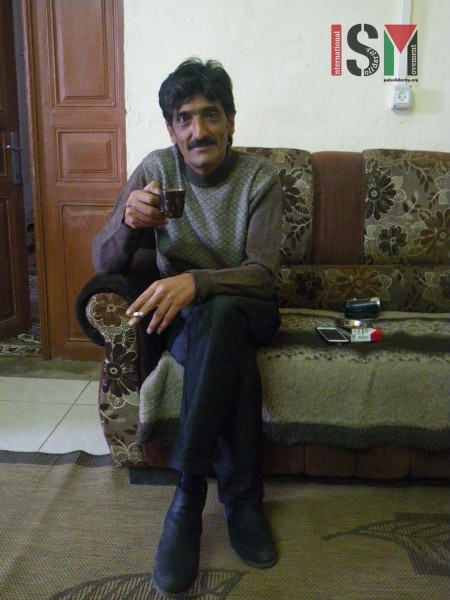 Imad in his family home

This night his backyard looked like your average neighbourhood barbecue, except that nobody was eating. Imad was sitting by the brazier alongside ten other men from the surrounding houses. His children were buzzing about, and his wife Faisa made sure everyone got their coffee and tea. When the soldiers showed up she made sure everything got caught on film.

There were three of them, all dressed in green, with black automatic rifles and some form of knee pads, which went well with the beret of their leader. They reminded me of turtles with their inability to look back over their shoulders. The execution had been condemned by president Netanyahu at first but later on, as the Israeli public opinion cleared in favour of the soldier, the shooting was surrounded with excuses. The situation for the messenger had however deteriorated.

As the soldiers walked in to the backyard a handful of camera LCDs lit up the night, like torches keeping the wolves at bay. Faisa brought her camera close to the officer’s face, where he hopefully saw a reflection of himself, a harasser of ordinary people.

The soldiers stood around for a while as they checked our passports and IDs. The situation was a bit tense but as everyone had the right to be there, they turned on their heels and left. They were the second delegation from the Israeli army that night. A lone soldier had come at first, to see if there was any protection present, and Issa guessed, to go back and tell  the settlers. Luckily, there were a lot of people showing Imad and Faisa their support.

As the hours passed people started to leave for their homes. Our delegation from the ISM spent the rest of the night at Imad’s place. There was an Indian soap opera on TV, dubbed to Arabic, and the children surfed the internet. It could have been a quiet night in a home anywhere in the world, if it hadn’t been for the occupation, or the death threats.