On Friday the 4th or March, Palestinians and international activists alike joined together to march against Israel’s illegal occupation in Kafr Quaddum. During this march, the boy identified as Khaled, 11 years of age was shot with live ammunition and suffered complicated fractures to the bones in his right thigh which have since needed titanium plates to assist in recovery.

The march began as usual and had progressed about 200 meters without seeing any soldiers. Since not being able to see any soldiers the children felt safe and decided to walk in front of the rest of the group.

Shortly after the children had progressed to the front of the march there was the sudden sound of live ammunition being fired. Khaled was hit almost immediately and fell to the ground whilst waving for help.

During the time that Khaled was on the ground the Israeli forces repeatedly threw sound bombs on the ground near him to deter Palestinians from helping whist they tried to arrest him.

A Palestinian man who saw Khaled in trouble ran to the young boys aid through the heavy shooting of live ammunition. 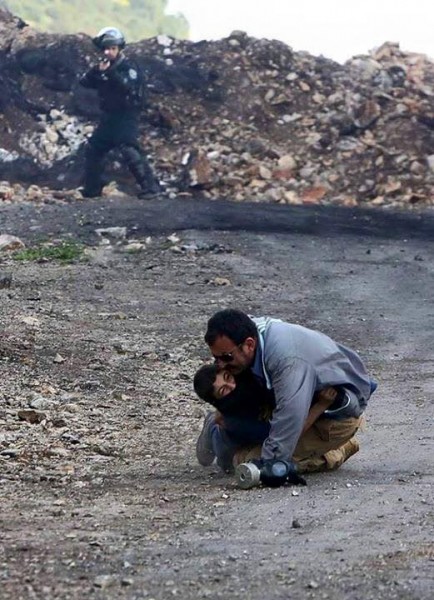 Whilst he was pulling Khaled away an Israeli sniper shot him in his thigh also. However he managed to continue and successfully pull Khaled to a safer point where two other Palestinians were then able to help.

From here Khaled was taken by the red crescent ambulance service to RAFIDIA Hospital in Nablus.

An x-ray scan showed that Khaled had suffered a complete fracture in his right thigh which would require surgery. Khaled was hospitalised for the following seven days.

What is important to note in the case of Khaled is that there were no immediate clashes when the snipers fired on him, he was shot from a strategic ambush by the occupying forces. What danger did these soldiers or snipers face from an 11 year old boy? Why did they throw sound bombs around an already injured and scared Khaled? Why did they shoot the man who also helped Khaled?

Khaled is the first in his class in the 5th grade and now faces an uncertain future through this school year as he is unable to walk for 6 weeks from the injuries that he has sustained plus ongoing rehabilitation after this period.

Whilst the illegal occupation of Palestinian land continues and the continued use of excessive force and inhumane treatment of Palestinians by the Israeli forces continues, so will the marches in defiance of the occupation until the international community acknowledges the Palestinians for the people that they are and the criminal zionist state of Israel is brought to justice for it’s heinous crimes against humanity.