11 years of peaceful resistance in Bil’in

On Friday, February 19th, residents of the village of Bil’in will march to celebrate the 11th aniversary of the beginning of the weekly protest against occupation. The small village of inhabitants has for over a decade united Palestinians and internationals to support their cause, following a non-violent, peaceful way of resisting against the illegal stealing and the occupation of their land. 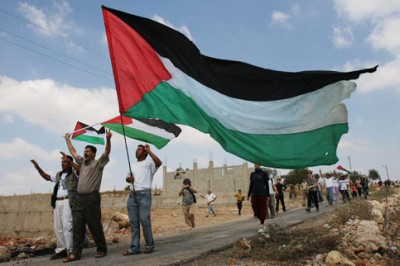 Palestinians take part in one of the nonviolent demonstrations against Israel’s wall in Bilin, September 2006. (Oren Ziv/ActiveStills)

The protests were initiated in 2005 when Israeli forces started uprooting trees on land belonging to Palestinians on the outskirts of the village, claiming they needed to free the route for the future wall that would be built for ‘security reasons’. Residents of the village first tried stopping bulldozers, calling for international and Israeli activists to join and support them, but the land was seized, and the wall was built.

The protests still continued, and every Friday villagers march to the wall to protest its illegal route and the expansion of the illegal settlement of Modin Ilit that is located right behind the wall and build on the villages land. The popular resistance committee also engaged in a legal battle against the presence of the wall on their farmland. Organisations in Israel and around the world supported their cause, and soon the weekly protest became a famous example of civil disobedience and peaceful resistance in Palestine. In 2007, the Israeli court ruled that the wall has to be re-routed. After major delays, a part of the wall was re-routed, marking a small victory for the village who thus regained at least part of their land.

Despite the violent opposition of the army during the weekly protests, the villagers are determined never to give up their struggle for their land, justice, dignity and against the illegal Israeli occupation. 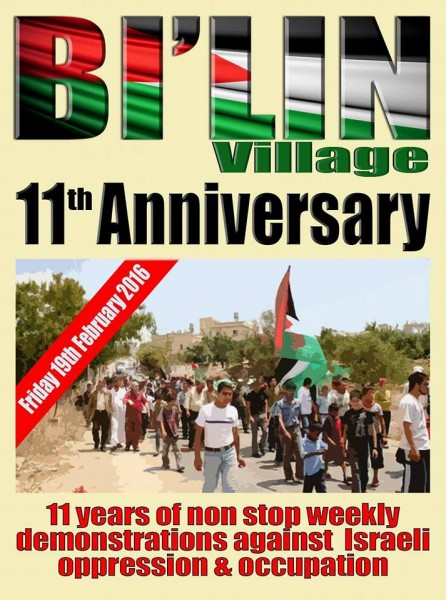 Poster for the anniversary of the popular struggle in Bi’lin